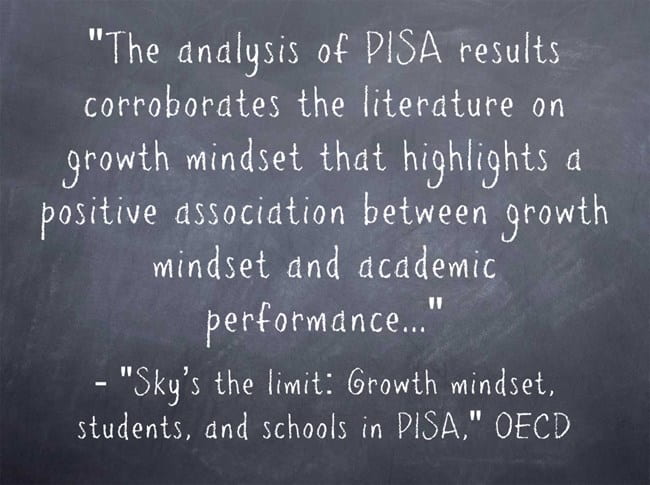 The Organisation for Economic Co-operation and Development (OECD) this morning released a huge report titled Sky’s the limit: Growth mindset, students, and schools in PISA

The report has a ton of great information about Carol Dweck’s “growth mindset” concept.

I have to say, though, I’m not entirely convinced that a ton of conclusions about who has and does not have a growth mindset can be accurately measured by what they did – which is basically ask just one question:

In PISA 2018, about 600 000 students from 78 countries and economies were surveyed to depict the landscape of growth mindset for 15 year-olds. PISA 2018 asked students whether they agreed (“strongly disagree”, “disagree”, “agree”, or “strongly agree”) with the following statement: “Your intelligence is something about you that you can’t change very much”. Disagreeing with the statement is considered a precursor of a growth mindset, as it is more likely that someone who thinks intelligence can change will challenge him/herself to improve it.

Nevertheless, a ton of other studies have reached similar conclusions (see The Best Resources On Helping Our Students Develop A “Growth Mindset” to find them), so my reservations aren’t that strong.

I do like that it highlights several strategies teachers and schools can implement to support the development of a growth mindset among students, which are highlighted in a chart at the end of this post.  I’m not sure that they are very helpful, since I would think most teachers make them part of their practice now, but I might be wrong.

I also noted that the report also suggests another strategy to support a growth mindset:

I’ve certainly posted a lot about that practice: Best Posts On Students Evaluating Classes (And Teachers)

I was surprised that it didn’t seem to offer specific suggestions to teachers about how they can introduce the growth mindset concept to students.

For what it’s worth, here is my “go-to” lesson: My Growth Mindset Lessons Usually Go Well, But What I Did Today Was The Best Yet (Student Hand-Outs Included).

And there’s this one, too: TWO FREE ONLINE PROGRAMS FOR TEACHERS & STUDENTS – ONE ON STUDENT ENGAGEMENT & THE OTHER ON GROWTH MINDSET.

Here is the info and chart from the report that offers other suggestions that teachers can do to support student development of a growth mindset (the chart is reprinted here with permission):

The index of teacher support is the most highly associated with students’ growth mindset among the three examined indices. On average across OECD countries, the four items composing the index are positively and significantly correlated with growth mindset (Figure 10). For instance, when students reported that their teachers help them with their learning, these students were on average 4 percentage points more likely to report having a growth mindset.

As I mentioned earlier, the report has a ton of good information and research citations about a growth mindset, so it’s definitely worth reviewing in its entirety.

New Study Examines What Helps Students Most With Reading Comprehension

Intriguing Research On How To Increase Intrinsic Motivation