Resources For Learning About Attacks On “Critical Race Theory,” The 1619 Project & Attempts To Stop Educators From Teaching About Systemic Racism 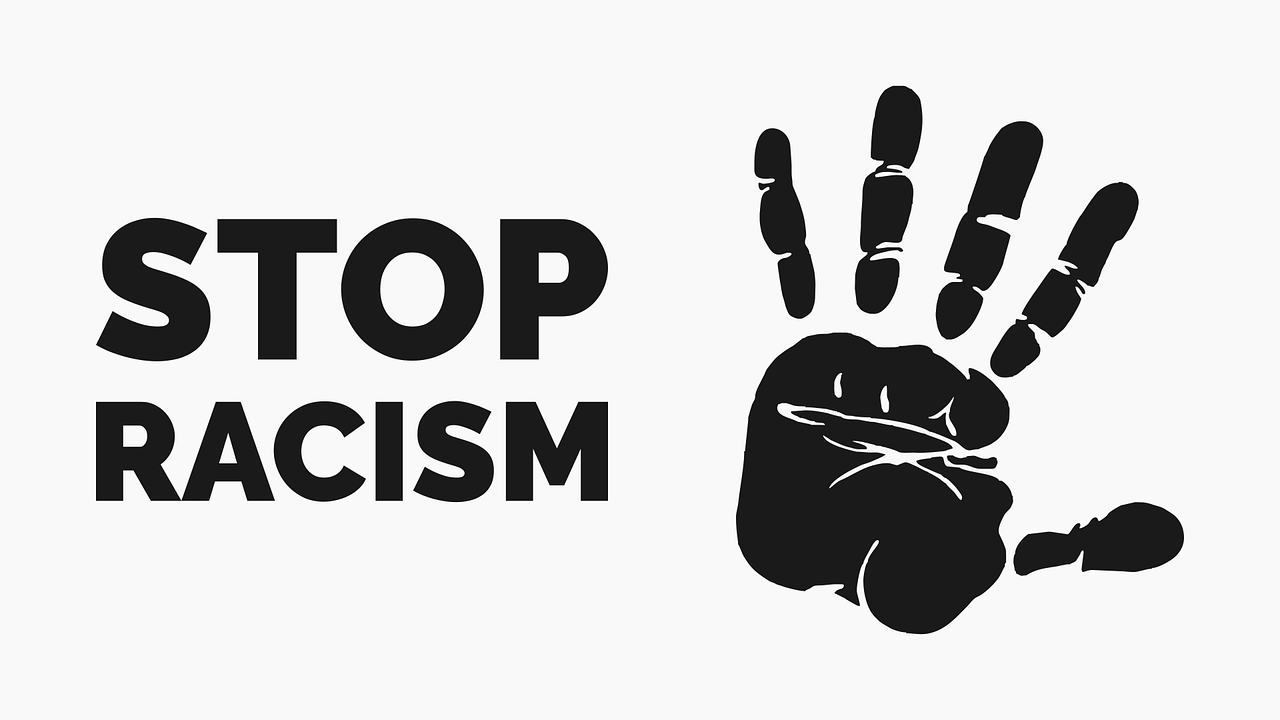 Check out the four-part series on this topic at my Education Week column.

Though critiques of The 1619 Project have been going on for awhile (see AUGUST 23RD IS “INTERNATIONAL DAY FOR THE REMEMBRANCE OF THE SLAVE TRADE AND ITS ABOLITION” – HERE ARE RELATED RESOURCES), the frenzy about Critical Race Theory and how it’s being used to stop educators from teaching about systemic racism is a line of attack from conservatives that I certainly did not see coming.

I’ve shared some resources about it earlier, but it’s obviously important enough for a “Best” list.

Here are my recommendations of where to learn more:

What Is Critical Race Theory, and Why Is It Under Attack? is from Ed Week.

Why Conservatives Want To Cancel The 1619 Project is from The Atlantic.

What is critical race theory, and why do Republicans want to ban it in schools? is from The Washington Post.

Teachers Say Laws Banning Critical Race Theory Are Putting A Chill On Their Lessons is from NPR.

Critical race theory is a lens. Here are 11 ways looking through it might refine your understanding of history is from CNN.

How ‘critical race theory’ came to dominate education debates in Texas is from The Dallas News.

EXPLAINED: The Truth About Critical Race Theory and How It Shows Up in Your Child’s Classroom is from The Education Post.

We Found the Textbooks of Senators Who Oppose The 1619 Project and Suddenly Everything Makes Sense is from The Root.

Mitch McConnell rebuked by alma mater over 1619 Project comments is from Salon.

This is absolutely correct. Journalists have been using CRT and 1619 Project interchangeably. I think CRT is valid and important but we need to stop letting bad-faith actors write the narratives for reporting. It’s called reporting for a reason. https://t.co/KkdHz80fuQ

“I don’t know how you teach about 1865 without acknowledging that 1619 was an important year.”@nhannahjones on Mitch McConnell saying 1619 is not an important day in history. #TheReidOut pic.twitter.com/BdPSDcqvsp

The problem with the way too many people on here who think/ write about race is that it’s not based on any significant study of racial history, sociology or economics, but merely comes from the authority of how they’ve experienced race. It’s a confidence based on ignorance. 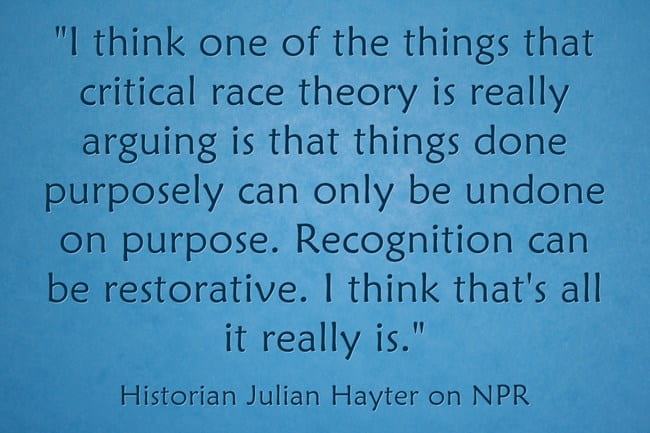 Understanding The Pushback Against Critical Race Theory In Schools is from NPR.

Texas bill to ban teaching of critical race theory puts teachers on front lines of culture war over how history is taught is from The Washington Post.

The Miseducation of White Children is from The Nation.

How I think James Baldwin would respond to the scare over critical race theory:

“It is not the black child’s language that is in question…It is his experience…A child cannot be taught by anyone whose demand, essentially, is that the child repudiate his experience…”

See, I feel like this debate really isn’t about defining “critical race theory.” (Yes, a real definition exists. But it isn’t all that relevant to what’s happening in this current moment.) This is about the right using that term to refer to any centering of race in public schools https://t.co/7TGXeIsrGd

And hint: CRT is not radical if you actually know what it is. The ideal that race is embedded in the law and our nation’s institutions is simply a historical fact.

Just as “fake news” really means “reporting I don’t like” and “cancel culture” means “accountability I don’t like,” “CRT” means “any conversation about race I don’t like.”

The Constitution of the Republic of Texas enshrined slavery, banned the manumission of enslaved people, and barred black people and native americans from citizenship. You could not make try harder to make the 1619 Project’s argument for them https://t.co/rhbWMTN62n

This is an amazing resource. Efforts to restrict teaching about racism and bias have multiplied across the U.S.https://t.co/2Z0hx1vf8l

This white panic about “teaching Critical Race Theory in schools” (when it’s not taught in anything lower than a collegiate seminar) would be funny if it wasn’t for the inevitability that everything from Toni Morrison to George Washington Carver is going to be branded as CRT.

This “rule” makes slavery, Native dispossession, Reconstruction, lynching, Jim Crow, and any number of other basic “factual” elements of American history either inexplicable or impossible to take seriously. And that’s the point. It’s got nothing to do with CRT. https://t.co/ZZuvyyIova pic.twitter.com/2TrDyxfYud

Teachers across the country protest laws restricting lessons on racism is from The Washington Post.

Why Everyone Is Wrong About Critical Race Theory In Schools: A Very Special Clapback Mailbag is from The Root.

Critical Race Theory Is a Convenient Target for Conservatives is from Slate.

What Florida’s “Critical Race Theory” Ban Tells Us About Anti-Antiracism is from Slate.

It’s like a bad movie script. “Arizona teachers could face a $5,000 penalty if they allow classroom discussions on controversial topics such as racism or fail to give equal weight to divisive topics, under provisions of a last-minute amendment.” https://t.co/LgfrsHhZTv

A group wants Washoe County teachers to wear body cameras to ensure parents that no “critical race theory” is being taught in classrooms.https://t.co/v4HEp3NBBG

Republicans, spurred by an unlikely figure, see political promise in targeting critical race theory is from The Washington Post.

Fox failed to fully disclose the professional conservative ties of 11 guests featured in segments about critical race theory, among them: Republican strategists and lobbyists, staff of conservative think tanks, and media personalities.https://t.co/EJs3PuO1YE

.@nhannahjones on attacks against Critical Race Theory, the explosion of #votersuppression laws, and the backlash against The 1619 Project. #TheReidOut #reiders pic.twitter.com/6vzKHSU5n1

This NPR interview with Gloria Ladson-Billings is really good.

What the hysteria over critical race theory is really all about is from Vox.

This is just so excellent. Stop what you’re doing and watch. https://t.co/0kDAltAsaN

“No one has to be ashamed for things they haven’t personally done. But you have to acknowledge the way that legacy has shaped your life and your country. And in confronting that legacy, we can be liberated from it.” — Nikole Hannah-Jones. #ALAAC21 #ALLibraries

My understanding of the anti-CRT arguments is that teachers can and should teach this history. But. It was bad actors, not about systems. And it was then, has no bearing on now. That’s the “right” way to teach history. https://t.co/I6dFLSsWyd

Four Things Schools Won’t Be Able to Do Under ‘Critical Race Theory’ Laws is from Ed Week.

The War on History Is a War on Democracy is from The NY Times. Here’s a quote from it: “History is not therapy, and discomfort is part of growing up.”

What Is (and Isn’t) Critical Race Theory? A Closer Look at the Discipline Texas’ Governor Wants to ‘Abolish’ is from The 74.

Bills Banning Critical Race Theory Advance in States Despite Its Absence in Many Classrooms is from US News.

Critical Race Theory Bans Are a Political Ploy, Students and Teachers Say is from Teen Vogue.

Nearly 40 yrs ago, James Baldwin identified what’s at heart of contemporary CRT scare:
“The real terror that engulfs the white world now is a visceral terror…. It’s the terror of being described by those they have been describing for so long.”
-Interview w/ Julius Lester, 1984

*Actual* Critical Race Theory: Racism is so normal, the dominant society will interpret an attack on racism as an attack on society itself.

This humorous video from The Daily Show only has one minor classroom inappropriate word at the end:

Teacher unions push back on debate over critical race theory is from Politico.

This is the end game. That’s why these anti-CRT laws are memory laws. https://t.co/zneZCOXJja

Critical race theory battles are driving frustrated, exhausted educators out of their jobs is from NBC News.

Many Americans embrace falsehoods about critical race theory is from Reuters.

How Will Bans on ‘Divisive’ Classroom Topics Be Enforced? Here’s What 10 States Plan to Do is from Ed Week.

As states place new limits on class discussions of race, research suggests they benefit students is from Chalkbeat.

So what is Critical Race Theory, really? And why is it so important?

Kimberlé Crenshaw (@sandylocks) sets the record straight on CRT and the right’s disinformation campaign in our latest video. Watch and share: pic.twitter.com/j2Hf4Oz0wb

“Whites, it must frankly be said, are not putting in a similar mass effort to reeducate themselves out of their racial ignorance. It is an aspect of a sense of superiority that the white people of America believe they have so little to learn.”

The Moral Panic Over Critical Race Theory Is Coming for a North Carolina Teacher of the Year is from Mother Jones.

American Education Is Founded on White Race Theory is from The New Republic.

TO COUNTER “CRITICAL RACE THEORY” ATTACKS, ADVOCACY GROUPS DODGE THE TERM is from The Intercept.

Republicans newly alarmed by critical race theory see bans as ‘more of a preventative’ is from NBC News.

Students need to learn about the haters and the helpers of our history is from The Washington Post.

As a part 1619 Project debate, “the nation’s founding has come under the most scrutiny. How much did 1776 hv to do with race and slavery? The answer is: you can’t tell the story without it. We have given the founding fathers passes when it comes to race.” https://t.co/w3y0ITBybk

Couldn’t believe this was true, so I read the bill myself. Sure enough, TX Senate just passed a bill to remove Frederick Douglass, MLK, Cesar Chavez, Susan B. Anthony, the Civil Rights Movement and more from the required reading in social studies. 1/x https://t.co/mho9PrvI8n

A $5 Million Fine for Classroom Discussions on Race? In Tennessee, This Is the New Reality is from Education Week.

The Way Teachers Cover Race And Privilege Could Have Big Consequences In Tennessee is from NPR.

What Critical Race Theory Means for Teachers is from Heinemann.

Analysis: How State Critical Race Theory Bans Could Trickle Down to the Classroom — and What Schools, Teachers and Parents Can Do is from The 74.

How to stop worrying that CRT will corrupt your kids is from The L.A. Times.

Critical Race Theory and the New ‘Massive Resistance’ is from The 74.

Here’s what Black students have to say about ‘critical race theory’ bans is from NBC News.

Can there be a winner in the school culture wars? is from The Christian Science Monitor.

What the Critical Race Theory Panic Was Really About (and the Data to Prove It) is from Slate.

My Life is Proof That Critical Race Theory Is More Than a Fox News Talking Point is from Esquire.

EXPLAINER: So much buzz, but what is critical race theory? is from The Associated Press.

What the Polls Really Tell Us About How Critical Race Theory Affected the Virginia Election is from Slate.

BINGO! “In the Fox News poll, white respondents opposed the teaching of CRT by 24 percentage points, but parents opposed it by only five points. That’s because many parents aren’t white, and the poll’s nonwhite respondents were twice as likely to favor CRT as to oppose it.” https://t.co/i266m0juz1

AS WE SAID: “So, yes, there was a backlash against “critical race theory” in Virginia. And, yes, it helped Republicans win. Their strategy of hyping, distorting, and attacking CRT worked. But it didn’t work by appealing to parents. It worked by appealing to race.”

The Last Time Democrats Tried to Combat a Slippery Concept Like “CRT” is from Slate.

How a School District Got Caught in Virginia’s Political Maelstrom is from The NY Times.

The Second Assassination of Martin Luther King Jr. is from The Atlantic.

Most Republicans oppose teaching kids about the lingering effects of racism is from The Washington Post.

The Conservative War on Education That Failed is from The Atlantic.

Union asks education chief to resign over complaint form is from The Associated Press.

“The World If” Is A Useful Feature From The Economist