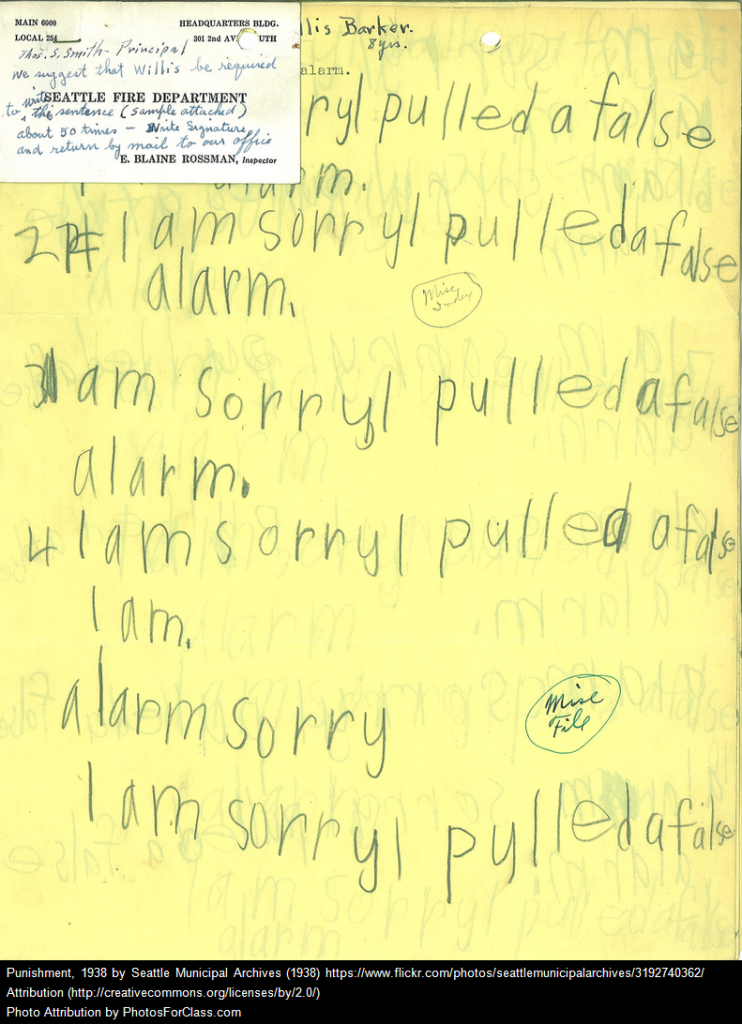 I suspect many teachers have had an experience like this:

A paper airplane, or a ball of paper, or a pencil, comes flying, or somebody makes an obnoxious noise. The object is probably aimed at another student, and it may or may not hit the intended target. The noise is just meant to be funny.

You can tell the general area from where it came from, but you don’t really know who the “culprit” is. It’s frustrating because that kind of behavior does not contribute to a learning community.

What do you do?

I’ve seen this kind of incident on TV and in the movies, and, at least there, it’s not uncommon to see teachers first yell something like, “Who threw it?” No one admits to it, and then the faux teacher will punish the group.

In my experience, I have seen a few teachers use this type of “collective punishment,” but have no idea how common it is. I’d like to believe it is not often done, but I’d be interested in hearing from readers on this point. By the way, here’s a definition of collective punishment:

Okay, then, if collective punishment is out, then what are the alternatives?

I’d like to share what I do in that situation, and I’d love to hear in the comments what you have found that works.

This kind of situation does not happen that often in my classes, thankfully, but it certainly does occur. What I usually do is go over to the area where I suspect the noise or projectile originated, and quietly explain that I don’t feel respected when this kind of thing happens. And, since I feel like I show that I respect them at all times, I would hope they would want me to feel respected. I then explain that I don’t know who actually did it, but that I would like each of them to commit that they will not throw something (or make a noise, etc.), and we shake on it. I tell them that I’m sure they are people of their word, and the matter is closed.

Nine times out of ten, that is the end of things, and there is no repetition.

However, if it does happen again, I go to the next step, as I did last week. Somebody in my class was occasionally making an obnoxious noise. I knew it was one of two students. I did the first step with them, and that went fine. Then, two days later, one of them made the noise again.

I asked them both to come outside with me, and explained that I was disappointed that one of them was not a man of their word. I knew that one of them was trustworthy, but didn’t know which one. So, now, I said that I couldn’t trust the word either of them, and didn’t like feeling that way. I suggested that the person who was making the noise might want to think about how their actions were now affecting the other one. Then, I told them I would give them a few minutes to talk about it privately (I left the door open asked them to stay in front of it so I could observe their actions, but not overhear what they said).

There hasn’t been an obnoxious noise since that time.

So, in other words, the second step, when necessary, is to ask students to consider the impact their actions have on others, and ask them to try to work it out among themselves. In my eight-year teaching career, this has almost always resulted in stopping the inappropriate behavior and, I hope, students gaining some added maturity. The one time it didn’t result in stopping the behavior, I just privately asked other students if they would tell me who the guilty party was and was immediately given the same name by multiple students.

This process works for me, and seems to work for my students. Of course, in order for it to work effectively, a teacher has to have a good relationship with students, and they need to feel that their teacher’s trust is something they value.

How about you — what are your alternatives to collective punishment?

(In addition to some great ideas readers shared in the comments section of this post, I’d encourage you to read a piece written by Matt Jacobson. He shared a great idea on how to handle a class after a sub day)

From The Archives: “What Does It Mean To Be A Good Citizen?”

A Look Back: Schools Could Do Far Worse Than Making This New Research Paper A Focus Of Professional Development For Months To Come