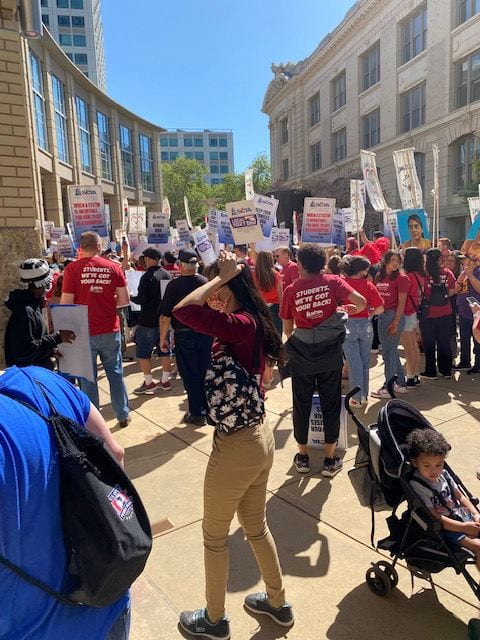 (Note: You can see my previous posts on our strike here)

Here’s a report from our union which, as a member of the bargaining team I can attest is accurate (I don’t see anyway to actually link this report to the union source):

The District’s behavior over the last week has been erratic. First, the District refused to bargain over the entire weekend, then came to mediation on Monday unprepared. Next, after saying it needed 15 minutes to caucus, it kept our bargaining team waiting for six hours and then released its proposals to the public in violation of mediation rules. We have filed an unfair labor practice charge with PERB over the District’s ethical and legal breach.

The next day, the District refused to meet face-to-face in the virtual meeting room and then made two identical proposals on the same day and tried to claim they were different. After we rejected the district proposal and offered a counterproposal through the mediators, the District then claimed it was waiting for a counterproposal. When the state of California’s elected leader in education calls the parties together to try to move the discussion toward a settlement, the District refuses to attend. It’s no wonder that the administrators represented by UPE added their voices to those who have no confidence in Superintendent Aguilar’s leadership.

So, our union has sent the district, again, our counter proposal, even though we gave it to them earlier in the week.

>For what it’s worth, here are some other commentaries I have shared on social media today:

How @officialSCUSD has handled this strike will be studied in education leadership courses throughout the country as a textbook example of how NOT to handle labor relations. See you Monday on the picket line, @SacTeachers colleagues!

Our Supt. hasn’t attended a negotiation in 3 yrs. His negotiators refused to enter the same Zoom room as the @SacTeachers bargaining team. He and school board members refused to participate in a Zoom meeting with @TonyThurmond . What are they afraid of? https://t.co/DXFTOab9C1 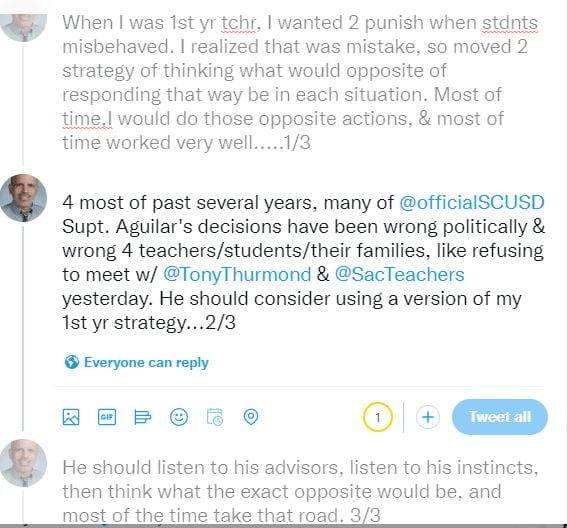 .@officialSCUSD has been harping about their eagerness to meet @SacTeachers . It's been seven hours since union sent counterproposal and said ready to meet this afternoon. @SacTeachers has received no response.

PBS News Hour Video: John Merrow Goes Out With A Bang In Segment On Success Academy