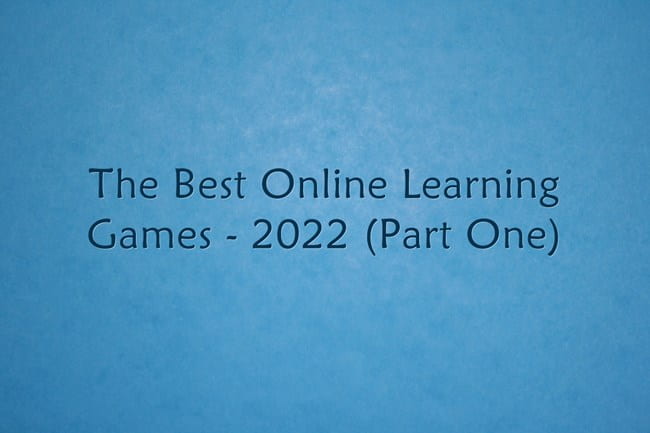 It continues to be time for mid-year “Best” lists.

You can see all my previous Online Learning Games “Best” lists (and there are a lot since I’ve doing this since 2007) here. Note that they’re also continually revised and updated.

Of course, this has been the year of Wordle.  Check out lots of classroom versions at THE BEST RESOURCES FOR USING WORDLE IN THE CLASSROOM.  The most popular post in my blog so far this year has been I LIKE THIS NEW GEOGRAPHY GAME CALLED “WORLDE” (NOT “WORDLE”).

Spardle is a Wordle-like game you can play with classmates in a virtual room. I’m adding it to The Best Online Games Students Can Play In Private Virtual “Rooms” and to THE BEST RESOURCES FOR USING WORDLE IN THE CLASSROOM.

The unimaginatively named Geography Game follows the typical mode of similar games – pick a world region, the site then gives you the name of a country or state, and you have to click on it. If you get it wrong, it will tell you the correct name, and you’re timed. Though there’s not much original about it, nevertheless it’s a useful game for students. I’m adding it to The Best Online Geography Games.

Wordcraft is a vocabulary game focused on the Latin and Greek roots of words. I’m adding it to The Best Websites For Developing Academic English Skills & Vocabulary.

Explordle, despite its name, is not a Wordle-ripoff. It’s a Geography game that shows you a short video and then provides you with a few choices. Based on what you saw, you have to pick the correct place where the video was made. I’m adding it to THE BEST TOOLS FOR TAKING STUDENTS “AROUND THE WORLD” and to The Best Online Geography Games.

Go Viral! is a new online game developed by the University of Cambridge to combat misinformation about COVID. I’m adding it to The Best Tools & Lessons For Teaching Information Literacy – Help Me Find More, which has quite a few similar games, though this is the only one focusing on COVID.

Prisoner in My Homeland is a role-playing simulation game about Japanese-American internment during World War II. It’s from Mission US, which has been justly criticized in the past for some of their role-playing games (you can read about those critiques at The Best Online Learning Simulation Games & Interactives — Help Me Find More). I have not played this particular game, but their most recent other ones have indicated they may have taken those criticisms to heart.  I’m adding this game to The Best Resources On Japanese-American Internment In World War II.

Map Puzzle has a variety of simple geography games where players are shown the physical outlines of states, provinces, countries, etc., while at the same time you’re given the names and accompanying puzzle pieces that belong there. I learned about it at a post in Google Maps Mania. That same post shared another site – called Jigsaw Explorer. There, students could create their own jigsaw maps that their classmates could play. I’m adding these resources to The Best Online Geography Games.

Since this post is appearing on our last week of school, you might want to check out I’M NOT SURE HOW MUCH EDUCATIONAL VALUE “SONG TRIVIA” HAS, BUT IT’S A WONDERFUL GAME TO PLAY ON THE DAY BEFORE A LONG BREAK

You can make free educational games at RPG Playground.

Breshna lets you make video games with no coding experience. I’m adding it to The Best Websites For Creating Online Learning Games.

QuizFlight is a new online testing tool that can also be used to create games. I’m adding it to The Best Ways To Create Online Tests.

The Best Articles I’ve Written In 2015

All My BAM! Radio Shows About English Language Learners

What Do You Do When You’re Having A Bad Day At School?