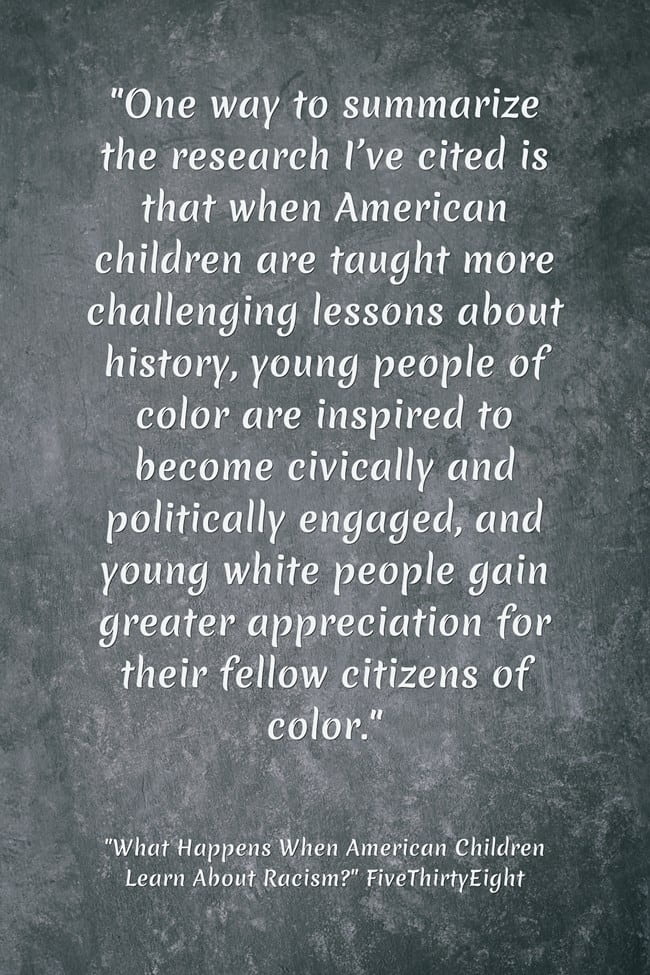 What Happens When American Children Learn About Racism? from FiveThirtyEight is a very important review of research about the results of teaching students about racism.

But, even better, it takes a step further and considers – given the benefits to young people – what might be the reasons for public resistance from many (though it is a vocal minority, according to polls) to schools providing this kind of education.

The author, Neil Lewis, Jr., a Cornell University professor, cites additional research and shares this conclusion (which I agree with):

…one reason why so many white Americans, especially white Republicans, might be concerned about the effects of teaching children about racism — and are actively trying to ban such lessons from schools — is a fear about what this type of education might mean for their own power in society. Teaching about racism could lead to greater cross-race coalition building and the expansion of rights and opportunities for racial minorities to participate in key decision-making systems, but that idea is interpreted by some Americans as an existential threat.

I’m adding this info to RESOURCES FOR LEARNING ABOUT ATTACKS ON “CRITICAL RACE THEORY,” THE 1619 PROJECT & ATTEMPTS TO STOP EDUCATORS FROM TEACHING ABOUT SYSTEMIC RACISM.

The Importance Of Respect In The Classroom