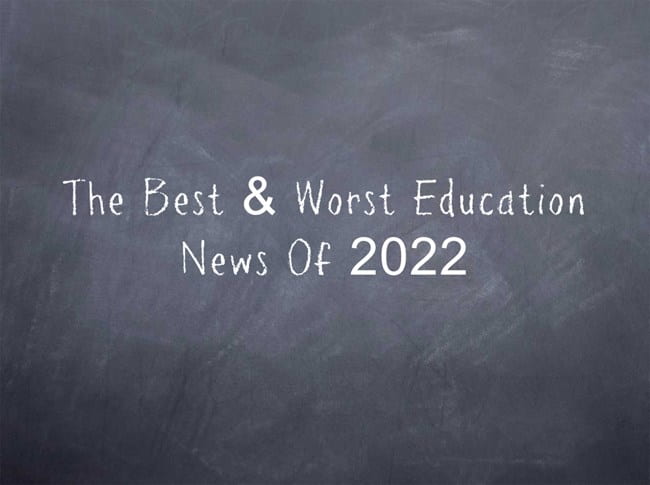 It’s been another challenging year for students and their families and teachers.

A version of this annual post usually gets picked up by The Washington Post, and you can see the last ten year’s of those editions here.

Here’s a look at my choices for the education highlights and lowlights from the past twelve months (not listed in any priority) – and do let me know what you agree or disagree with, or what you think I’m missing!:

The Best Education News of 2022

*ELECTORAL RESULTS: There were a fair number of positive electoral results. Though there were notable exceptions, many of those who used LGBTQ and Critical Race Theory fears to stoke attacks on teachers and schools were unsuccessful.  In addition, New Mexico voters passed a landmark early childhood initiative, a funding program for the arts passed in California, and many teacher-supported school board candidates won (including in our own Sacramento district, where all three union-backed candidates won following a nine-day strike earlier this year) in that state, as well.

* PARENTS ARE HAPPY WITH THEIR CHILDREN’S SCHOOLS: Though teacher-bashing appears to be popular, surveys consistently found this year that huge majorities of parents are more-than-satisfied with the education that their child is receiving.

* RECOGNITION THAT HIGH TEST SCORES AREN’T THE HOLY GRAIL: A number of researchers published studies this year finding that many students, particularly those experiencing the biggest challenges, gain some of the greatest long-term benefits from aspects of a school that are not measured by test scores (such as Social Emotional Learning support). Getting off this test-data-driven train to nowhere was also advanced by a number of education leaders.  It looks like more-and-more people are recognizing what Dr. Ivory Toldson of Howard University said this year: “We should not use numbers to understand people, we should use people to understand numbers.”

* ABBOTT ELEMENTARY PROVIDED TEACHERS A LIFT: Quinta Brunson’s show was a delight for teachers everywhere as we saw our struggles and joys seen on national TV, as did everyone else. In addition, we can now hope that every teacher professional development session provided by anyone who is even quasi competent will be exponentially improved by inclusion of clips from this show.

* STUDENTS HAVE BEGUN TO PROGRESS ACADEMICALLY AGAIN: We all want our students to progress more rapidly academically, and there is a long way to go, but standardized test scores have begun to show they are getting back on track.  It’s not far enough (see later “worst” news), and test scores are not the only way to measure progress (see earlier “best” news), but things are moving in a positive direction.

* MAJOR PHILANTHROPIC MOVES TO SUPPORT SCHOOLS: The Gates Foundation announced a huge investment in math education, and I’m only including this initiative in the “best” news section because one has to believe that even they can learn after years of screw-ups that they finally have to learn from teachers before they spend their cash. Looking at a different model of grantmaking that all funders can learn from, MacKenzie Scott has begun providing support to public schools and will soon be inviting organizations to apply to her.

* ALEX JONES MADE TO PAY FOR SANDY HOOK LIES: It’s too little, too late, but the courts are making Jones pay for all the lies and misinformation he spread about the Sandy Hook massacre. Perhaps we can hope that this consequence might force others to have second-thoughts before they lie-for-profit?

* FORTIETH ANNIVERSARY OF COURT CASE GUARANTEEING EDUCATION TO UNDOCUMENTED: We were able to celebrate the fortieth anniversary of Plyler decision, which guaranteed the right of undocumented children to attend public school. Unfortunately, the governor of Texas, compassionate man that he is, also announced that he would go to court to challenge that decision and, with this Supreme Court, who knows what might happen?

* STUDENT LOAN FORGIVENESS: The Biden administration expanded the student loan forgiveness program for public servants, and many teachers benefited from those changes.  The bigger and even better news, of course, was the unveiling of the broader student loan forgiveness program for everybody.  That’s now stalled because of conservative objections, and the Supreme Court will rule on next year.  We’ll see then if their ruling ends up on the best or worst education news side of things twelve months from now.

* SOME PROGRESS AGAINST SELECTIVE ADMISSIONS: Though there were some steps back in New York City and in San Francisco in returning to selective high school admissions processes  that penalized students of color,  many New York City middle schools were able to get rid of theirs.

* INCREASED CHILD TAX CREDIT REDUCED POVERTY: The good news is that the increased child tax credit reduced poverty.  All the research shows that the majority of factors that influence student academic achievement are outside of the school’s four walls, so this advance clearly helped our students and their families.  The bad news is that the credit expired.  There’s hope a version of it might see the light of day again.  This development – or nondevelopment – is likely to be in one section of next year’s best and worst education news.

* UNION STRIKES SUCCESSFUL IN IMPROVING EDUCATION FOR ALL: Teacher, and in many cases, classified worker strikes in Sacramento, Seattle and Minneapolis resulted in major improvements for educators, their students, and their families.  And, even though it didn’t directly affect K-12 teachers and students, kudos to the 36,000 academic workers at the University of California who just notched a big win.

The Worst Education News of 2022

*STUDENT ACADEMIC CHALLENGES ARE REAL, AND SO ARE ADULT IRRATIONAL REACTIONS: Yes, many of our students are clearly facing academic challenges because of the pandemic – believe me, we teachers know that more than anyone.  And we are all trying our best to “accelerate learning.” What doesn’t help anyone, though, are repeated inaccurate rants from people who were able to work remotely during the worst of the pandemic about how we teachers and our unions caused these challenges by demanding that schools go to distance learning, and about how Randi Weingarten is the “most dangerous person in the world.” Get a grip, people, and let us teachers do our jobs with a little less harassment, please.

* THE MENTAL HEALTH OF OUR STUDENTS:  Over 200,000 American children have lost a caregiver to COVID, and there has been a huge increase in the number of students seeking mental health support. Schools, teachers and families are trying their best, but so many of our students are in pain.

* WE ALL CRY FOR UVALDE: The Uvalde massacre was awful, and school shootings reached a twenty-year high. As The Onion publishes after each mass shooting, “’No way to prevent this,’ says only nation where this regularly happens.’”

*LGBTQ STUDENTS & EDUCATORS UNDER ATTACK: Because teachers and students aren’t facing enough challenges, and because right-wing idealogues are merciless in attacking who they believe are the easiest targets for political gain, LGBTQ students and teachers found themselves under attack in multiple states, and particularly in Florida.

* CRTICAL THINKING UNDER ATTACK: Of course, attacks on LGBTQ students and teachers were only one part of the right-wing strategy to make political points at the expense of student education.  Painting any efforts to discuss systemic racism or act on it in schools as being part of the Critical Race Theory boogeyman resulted a fair amount of “success,” with 25% of teachers being told to “limit their classroom conversations about political and social issues.”

* BOOKS UNDER ATTACK: As an Axios headline read, “Book Bans Are Back In Style.” What could go wrong with so many books, in so many places, being banned? If you ask teachers, it ain’t pretty.

* SOCIAL EMOTIONAL LEARNING UNDER ATTACK: Just as our students need the most support, conservatives began attacking Social Emotional Learning as being under the same banner as Critical Race Theory. Sometimes this year I have thought back to what Joseph Welch famously told Senate Joseph McCarthy in 1954, “Have you no sense of decency?”  How low will these people go to make political hay?  How much of our students’ well-being are they willing to sacrifice for their political ambitions?

* TEACHERS ARE NOT DOING WELL: Teacher job satisfaction is at its lowest level in fifty years; we make considerably less than other college graduates; and, though parents trust their children’s teachers, they don’t want their children to become one. Though the facts about a teacher shortage today are more nuanced than some headlines suggest, there is no question that fewer people are entering the teaching profession. Fun times, indeed.

* PUBLIC SCHOOL ENROLLMENT GOING DOWN: Student numbers are headed downward, and no one knows if and when those numbers can be reversed.  This crisis just complicates the oh so many other challenges facing our schools today.

This completes my review of the year-in-education.  Let me know what you think!

The Best Online Resources For Learning About The Gettysburg Address