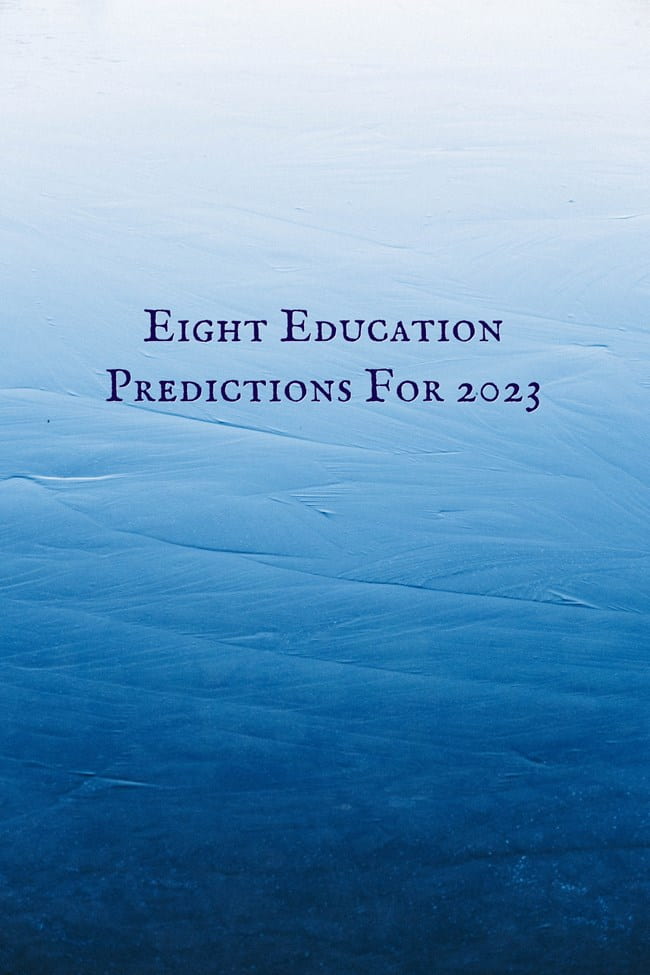 I’ve been making annual predictions for over a decade and my track record can be charitably described as “uneven.”

My attitude on both the basketball and Pickleball court has always been one of only remembering the shots I make (which, admittedly, doesn’t always make me the most popular teammate).  But that works for me there, and I tend to have the same attitude with my education predictions.

Here’s what my crystal ball tells me for the future – let me know what you think, and make your own predictions, too!

*Student standardized test scores will continue to rise at a gradual level, and some critics (many whom worked remotely at the time) will take their lack of a meteoric rise as yet another opportunity to bash schools who made very wise decisions to move towards distance learning at the height of the pandemic. These same critics will also continue yelling at parents who are focusing more on the physical and emotional well-being of their children instead of their test score results.  Smart districts will begin to put resources into providing individual student reports, highlighting both their assets and challenges, to help students and their families determine what, if any, additional academic assistance they should pursue.

* Teachers will continue to work their buns off providing academic learning and emotional support to students.  Despite what some people not in the classroom say, there will be no “urgency gap” in our schools over the next twelve months (nor has there been one during the past twenty months, either).

* There will be a general educator freak-out about the impact of Artificial Intelligence tools like ChatGPT on student writing and other work.  But, within a few months, teachers will get a handle on it and adapt, as we have done with calculators, cellphones, laptops, and other tech advances.

* Despite Elon Musk’s best efforts to destroy Twitter as a positive avenue for connection, many teachers will stay on the site and continue to learn from each other.  Alternatives like “Post” and “Mastodon” just won’t make the cut as replacements.

* Right-wingers will continue grinding away attacking LGBTQ youth, Critical Race Theory, teaching about systemic racism, and even Social Emotional Learning.  However, this past year will be viewed as “peak hysteria” and they will find that their screeds have already worked anywhere they were going to, and even their professional scam artists will have difficulty coming up new targets to go over after.  Unfortunately, though, it won’t help teachers and their students in communities where these attacks have already worked.

* As a recession hits and pandemic monies are used-up, many districts are going to try to save money by creating incentives for older experienced [and higher-paid] teachers to retire early. It isn’t going to be a pretty picture for our students, but I don’t think we can expect creative “outside of the box” thinking from many public and district officials.

* A “backlash” against school laptop use, especially in ninth-grade and below, that began last year will continue to grow.  Large numbers of students “overdosed” on screens during distance learning and prefer pen-and-paper in the classroom now.  And many teachers are tired of having to manage potential online student distractions when using laptops.    Combine those concerns with ones about Artificial Intelligence sites (see an earlier prediction) and we’ve got an example of “the more things change, the more they stay the same.”

*I borrow this last one from educator Bill Ivey every year. He predicts that “each and every school day will bring tens of thousands of reasons to celebrate in schools across the country.”

Statistic Of The Day: Lots Of Teachers Voted For Trump

Statistic Of The Day: Graduation Rates Rise, But…