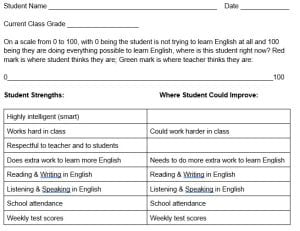 To help begin the New Year, I’ve begun meeting individually with each of my ELL Newcomer students.

We are jointly completing what I’m calling a “Student Personal Report.”  You can see part of it at the top of this post, and download the complete form here.

First, I give the student a red pen, and I hold a green one. I show them this English version, as well as a translated version in their home language (it’s easy to create them under “Tools” in Google Docs), and tell them that I would like us to complete this form together, and then bring it home for a family member to sign.

They write their name and date in red, along with the grade they think they have earned in class. I then write the grade I believe they deserve, which is practically always the same or higher.

Next, on the scale of 0 to 100, I ask them to put their mark in red where they think they are in terms of doing everything possible to learn English. Then, I put my mark down, which is typically slightly lower.

I then explain that I am going to first circle in green the areas I think are their strengths, and then I’ll ask them to put a red check mark next them where they agree, or circle in red areas I have not circled. The form is obviously designed to highlight their strengths.

Then, I circle in green areas where I think they need improvement and, again, they put red checks where they agree.

We’ve always been in agreement, and I don’t think it’s just because they want to go along with what I say.  There is a strong culture of honesty, and an emphasis on developing positive relationships, in the class.

Next, we review different options for work they can do going forward to improve their English. There are a list of possibilities, along with space for them to write their own. It looks like this:

Actions students can take to continue strengths and make improvement:

2. Write in English about a picture for homework three nights a week.

3. Record themselves describing a picture three nights a week.

5. Study in Mr. Ferlazzo’s room during lunch for fifteen minutes each day.

6. Read a simple English book each week at home and write about it in English.

They’ve come up with good ideas on their own, including “watching a movie in English and writing about it.” I encourage each student to identify at least three actions they can take and mark them in red.  I have forms that I’m in the process of modifying, for students to use with several of these activities.

Next, they sign their name, and I explain that would like them to go over it with their family member – using the translated version – and have them sign the English version.  I emphasize the importance of not just “shoving” the papers at them and, instead, carefully reviewing it with them.   Since the report emphasizes strengths, and everyone has a good grade, it’s really in their self-interests to actually do this part.

The meetings have gone well so far, and students seem to be following through. Of course, we’ll see how it goes in a month.

The only challenge, and it’s a big one, is creating the time to have these individual meetings – they take about ten minutes each.  I’ve done some during my prep time when they are in a support class and the teacher has been open to my taking them out to have the conversations.

Any ideas on how to improve the form or process are welcome!

A Look Back: 26 Places To Get The “Same” Text At Different Levels