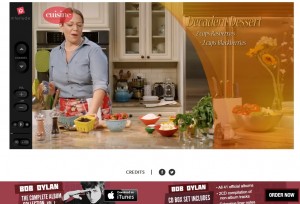 As you might have heard, Bob Dylan released an amazing interactive video of his song, Like A Rolling Stone, today.

You can see it here, and read about it here.

It has sixteen different tracks, like television channels (including a cooking channel as the above image shows), synchronized with different people in different locations mouthing words to the song. It’s got to be seen and heard to be believed.

I’m trying to figure out if and how it could be used with English Language Learners. I’ve never used the song before — the lyrics, I think, would generally be too confusing. However, the chorus is usable. I wonder if students could learn the chorus, sing it at appropriate times, and use the different tracks for Venn Diagrams and compare/contrast paragraphs?

Even more interesting, though, is that Interlude, the actual creator of the video, lets people use their site — for free — to create their own interactive videos. Here’s what I’ve previously posted about them:

Interlude lets you create sort of a “Create Your Own Adventure” video. It’s a little too complicated for me, but you can read more about it at TechCrunch.

Video: “Hum” Is A Good Movie For ELLs

New Video From TIME: “Here Are The Best Commencement Speeches Of 2019: