Teaching ELLs About The Language Of Slavery 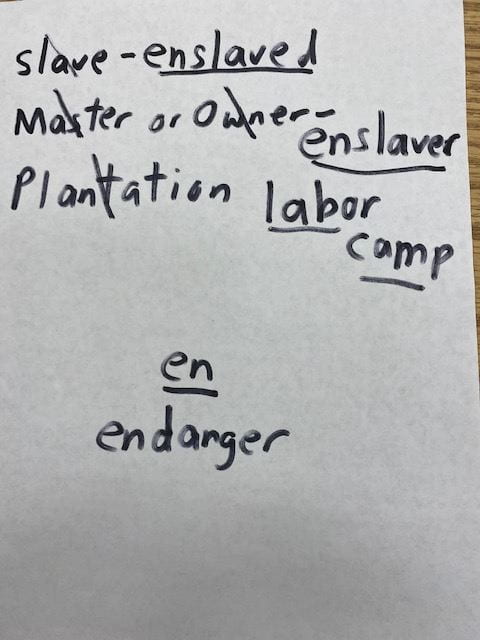 I’m embarrassed to say that, even though I’ve taught U.S. History every other year for the past decade to Intermediate English Language Learners,  I didn’t make it a priority to teach them about the appropriate language to use about slavery until now.

The rationale I used in my mind was that it going to add just too much complexity to students who were just beginning to learn English. After all, basically all the texts they’ll see will use the language of “slaves, owners, plantations.”  Why teach language that they won’t see being used?

As advocate and user of critical pedagogy in so many other areas, of course we should use appropriate language about slavery!

Students can then take the power themselves to correct texts – and teachers – who use the inappropriate language!

It just took a few minutes to use the overhead (see the photo above).

I explained that many textbooks, teachers and movies use the words “slaves, masters or owners, and plantation,” which I wrote on the left side of the paper.  I went on to say that many historians and others say that there are better words to use.

“Slaves,” I said, are people who are forced to work without pay and are treated like property, like a desk or a chair.   But people aren’t born “slaves” – others make them into slaves.  Since “en” means someone caused something to happen (I shared other examples like “endanger” – someone puts someone in danger), we are going to use the word “enslaved,” instead.

There was some discussion between students and me, but the impression I received was that it made perfect sense to them.

So, I crossed out “slave” on the overhead and wrote “enslaved.”

Next, we went on to “master or owner.”  I simply asked, “Can anyone really own another person?”  Everyone quickly responded, “No!”  So, I wrote “enslaver” after crossing out “master or owner,” and reminded students of the “en” meaning.

Then, I explained that plantations were big farms that were often physically beautiful in many parts and that now there are even weddings at many of them.  At these places, though, enslaved people were forced to work, and often whipped and punished.  So, they weren’t beautiful, they were more like terrible prisons, so that some historians say we should call them “work camps.”

This entire discussion really only took a few minutes.  It was followed by students completing a series of short clozes (gap-fills) about slavery using this language (I’m not sharing them here because I believe I modified it from other people’s writings, but can’t really remember).

Then, students had to write an ABC paragraph (Answer the question, Back it up with evidence, Comment how their evidence supports their answer) answering this question:

Why did enslavers force people to come to the Americas from Africa and enslave them?

Students did a great job writing, and easily, and accurately, used the language we had reviewed.

Another lesson about never under-estimating our students….