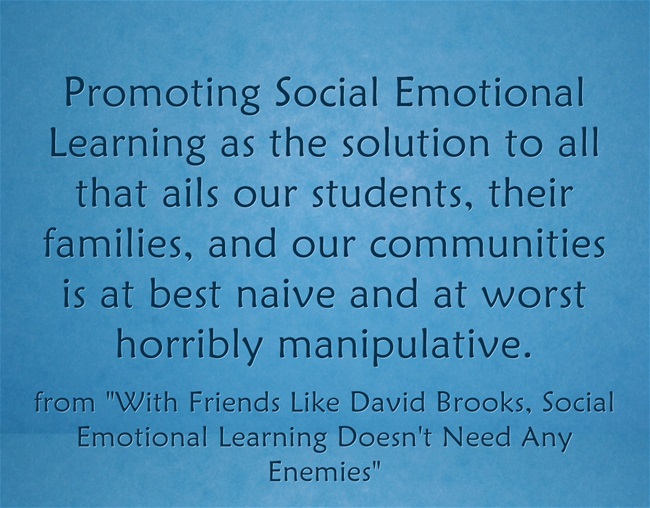 His column today, The Character Factory, quickly dismisses the effectiveness of programs that provide economic assistance to low-income people because “they have produced disappointing results.” Of course, he provides no evidence or details for that critique. Perhaps he should actually talk to a low-income person now-and-then who has benefited from food stamps, rental and home-buyer assistance, the Earned Income Tax Credit, Medicaid, etc. And he doesn’t consider the possibility that those programs might be even more beneficial if they were better funded. This is the kind of critique that comes from someone who has never needed that kind of assistance.

Then, he launches into a paean to the need for poor people to have character — that’s the ticket! They just need a little grit, self-control, models (he calls for a “Boomercorps” of volunteers to provide them), good habits (to his credit, he does throw a bread crumb at “opportunity” by mentioning that it would be important for college to be affordable).

No wonder there is a growing backlash against Social Emotional Learning by those who see it being co opted as a low-cost way by many conservatives to avoid providing adequate economic support to schools and as an excuse to avoid discussion of income and wealth inequity.

I’m a big supporter of teaching Social Emotional Learning skills. In fact, I’m just completing my third book on the subject. But in my teaching and in my writing (even more so in this third book), I recognize that my students have many challenges ahead of them, and that SEL is one small (though important) piece of the puzzle.

Promoting them as the solution to all that ails our students, their families, and our communities is at best naive and at worst horribly manipulative. At it’s very worst, it could also be called neocolonialist or educational colonialism.

As far as I can tell, David Brooks has never written a coherent column on anything related to education.

Oh, well. At least The Times has Paul Krguman…..

“Is your brain grass or a glass?”

More On The Marshmallow Test

The National Day Of Writing Is On Oct. 20th – Here Are 36 Related “Best” Lists

Quote Of The Day: A Problem With Book “Leveling”