Teaching History In The News!

Boy, the teaching of history is in the news!

First up, Bill Gates, who thinks we should all learn math through the Khan Academy (see The Best Posts About The Khan Academy) because he likes it, now has a way in mind he wants us all to learn history. Read about it in today’s New York Times story, So Bill Gates Has This Idea for a History Class …

Apparently, Gates was watching this history video about history while running on his treadmill, and now has created a course he wants high schools to teach using this methodology. It’s called The Big History Project and, after a quick perusal, I wouldn’t put it on any of my “Best” lists. However, I am adding the piece to The Best Resources For Learning About The Role Of Private Foundations In Education Policy.

You’ll want to read the article, which provides a fair amount of space to valuable criticisms about education philanthropy, including this one:

“I just finished reading William Easterly’s ‘The Tyranny of Experts,’ ” says Scott L. Thomas, dean of the School of Educational Studies at Claremont Graduate University in California. “It’s about philanthropists and their effect on the poor globally. It’s this exact idea that here you have this ‘expert’ in the middle” — that is, Gates — “enabling the pursuit of this project. And frankly, in the eyes of the critics, he’s really not an expert. He just happens to be a guy that watched a DVD and thought it was a good idea and had a bunch of money to fund it.”

Here are some other interesting comments:

Leave aside the insanity of allowing a particular billionaire to reshape high school curricula to meet his interests. http://t.co/GFRFjnr0Vq

The bigger problem, as @samwineburg points out, is that the course lacks a methodology. It's entertaining, but doesn't help students think.

And here’s another excerpt from the article: 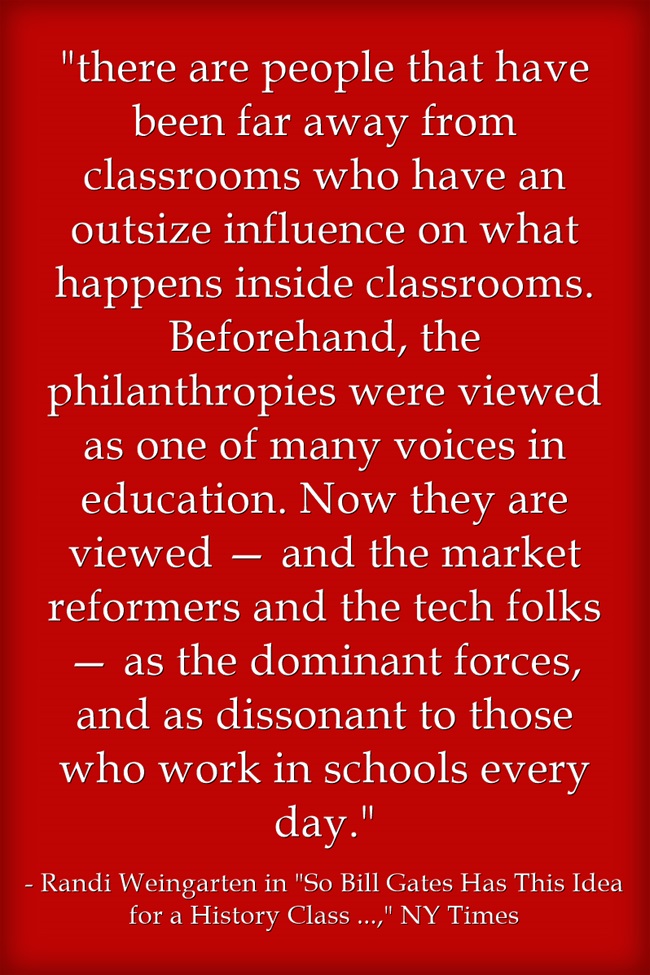 On the other hand, here are some more useful recent resources on teaching history:

Does It Help to Know History? is from The New Yorker.

The New History Wars is from The New York Times.

Don’t Know Much Revisionist History is from Slate.