A new study attempting to replicate the famous Marshmallow Test has been released, and it’s getting a lot of media attention (Why Rich Kids Are So Good at the Marshmallow Test).

Here is what it says – in a nutshell: 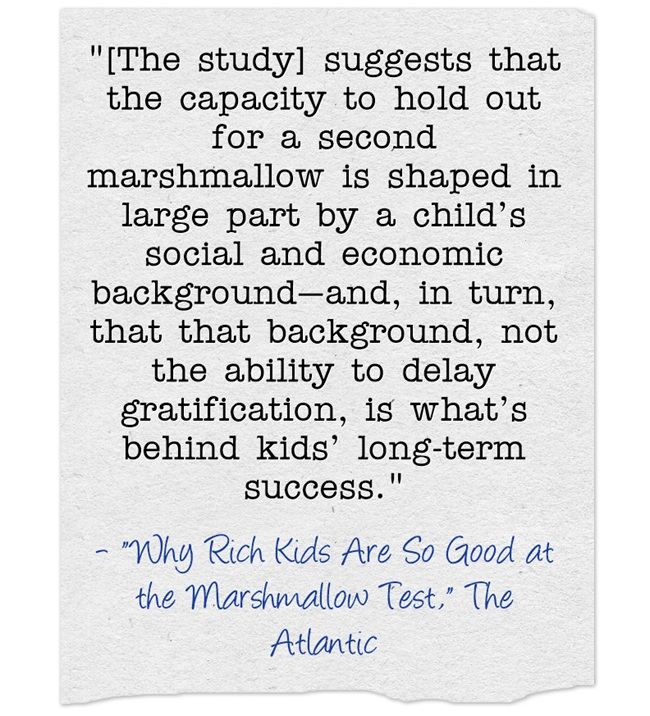 This isn’t an exactly new finding (see Marshmallows & Trust), though the study does seem to try to do a particularly thorough job.

It is also important to keep in mind a few other things about this new study – it appears to only track participants to the age of fifteen, while the original one is keeping track of life outcomes for a far longer period of time; and other studies have, indeed, replicated the original results. You can see links to those points at Best Posts About Helping Students Develop Their Capacity For Self-Control.

And, the study doesn’t say that there was no connection between early signs of delayed gratification and future success.  It says it was just much smaller than in the original experiment after incorporating outside factors.

So, before people throw-out the usefulness of The Marshmallow Experiment in the classroom, they should keep in mind my critique, and the critique of others, about recent studies that have devalued the role of deliberate practice in the face of natural talent, which I discuss in Deliberate Practice & Red Herrings – it may not be as influential as first thought, but it is within an individual’s control.

I do not teach Social Emotional Learning concepts as simple answers to the complex challenges facing many of our students.

Rather, I teach them as twinned with the social, political, economic and racial challenges that they also face – and what they can do about them. In fact, as I’ve shared in The Manipulation Of Social Emotional Learning and in some of my books, research has shown that doing both can be particularly effective (also, see The Best Resources Showing Social Emotional Learning Isn’t Enough).

One point the study makes near its end should also be highlighted, which I think supports the strategy I use:

I’m a bit surprised that, after finding that outside economic factors influence outcomes, they didn’t include the idea of helping students developing a sense of agency about the political realm. But, nevertheless, they appear to be saying that we can’t just teach self -control in isolation – we need do it as part of helping students develop broader social emotional learning skills.

And, as I’ve said, I’d add the skills needed to become active citizens in a democracy, as well.

ADDENDUM: Check out Ed Week’s article on the same study: Passing the Marshmallow Test May Be More About Smarts Than Self-Control, Study Says

New Report: “The Science of Learning: How Current Brain Research Can Improve Education”