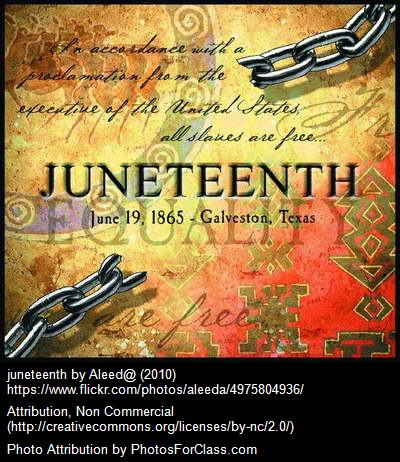 Here’s a description of Juneteenth from TIME:

Juneteenth is a contraction of the date “June Nineteenth.” On that day in 1865 in Galveston (then Texas’ largest city), Union General Gordon Granger issued General Order Number 3, which stated: “The people of Texas are informed that, in accordance with a proclamation from the Executive of the United States, all slaves are free.”

Coming 10 weeks after Lee’s surrender at Appomattox on April 9, Granger’s proclamation caused joy for former slaves, shock for their owners and cataclysmic changes for all. The 250,000 former slaves in Texas celebrated June 19 to honor their emancipation and to foster political engagement by African Americans.

I’ve just updated The Best Resources For Learning About Juneteenth.