Last year, I began a new regular interview series. There are always lots of “hot spots” around the world — places where there are natural disasters, political upheavals, etc. And English teachers can be found in most of those places. If you are an EFL/ESL teacher in one of those areas, please let me know.

Today, I’m pleased to interview Anna Loseva from Russia. Elections and protests there (see The Best Resources For Learning About Protests In Russia) have been in the news.

Can you tell us a little about what and where you teach, and what led you to teaching English?

I am currently teaching General English, ESP and EAP courses to undergraduate and postgraduate students of Physics at Moscow State University. I also give in-company classes, in both General and Business English. Like almost any ESL teacher, I work as a tutor in the spare time I manage to find, teaching English to adults or young adults. I’ve been teaching for more than five years now and, having gone through all stages of education system in Russia (except kindergarten), I find this “domain” most interesting for me and challenging at the same time.

Frankly speaking, when I entered the Faculty of English Philology at Moscow City Pedagogical University I had no inclination to take on teaching as a career path. After studying for 7 years in a class specializing in Maths, I just knew I wanted to deal with people, not with figures.  That seems to be the reason I chose philology then – languages meant communication, culture, the socio-driven future. Yet the fourth year of studies officially presupposed 2 months of hands-on experience in teaching. Somehow I got so enthusiastic about the process, about possible creative approaches to a lesson that I started working part-time at a private school the same year. My relationships with school system didn’t  work out in the end, but the story briefly describes how I’ve found myself  teaching ESL (which I’m doing with enormous pleasure now!).

What have you seen happening in Russia over the past month?

On December 4th the elections took place all over the huge country – the population voted for parties to be represented in the State Duma (lower house of Russian legislative body). The results were what had been expected – the party currently at the power the United Russia (with V. Putin as a leader) won the overwhelming  majority of seats in the parliament. On the next day after the Sunday of elections Russian blogosphere, social networks and independent sources were literally flooded by numerous accounts of a global-scale fraud by the United Russia representatives at election places. Pictures, videos, posts showed evidence of what we call “vbros” – an illegal act of throwing in fake vote sheets. This caused a lot of buzz online – to little or almost none coverage on TV (highly political here). President Medvedev did react to these accusations some time later saying that the videos might be fake themselves, yet the information had to be checked. Later on, both Medvedev and Putin officially confirmed the results of the elections and stated they were fair and reflecting the will of the people.

Following these reactions the above-mentioned people organized massive protest demonstrations in different cities of Russia (and outside Russia as well!) – two within less than a month – gathering thousands of students, bloggers, doctors, showmen, public figures, etc. The striking feature of these protests is, first of all, the immensity of the events. Russia has not seen so many people disappointed in government and its decisions on the streets for many years, and this public expression of disagreement on such a massive scale is very exceptional indeed. Yet, the protestants cannot directly be called “opposition” – the claims are for “fair votes”, for democratic elections in the best sense.

Anyway, the meetings went very smoothly and finished with no casualties. Russians in revolt proved to be polite, peaceful and law-abiding.  More protests are scheduled for January 2012.

How have your students reacted to the election and protests?

We’ve been discussing the events since some minor relevant political stories occurred. I encouraged my students to go and vote, the United Russia representatives came to the dorms and lectured (threatened?) the innocent young adults on how their lives and studies could inevitably change for the worse if the ruling party lost its domineering position.

Here are some of the opinions of my students, quoted from feedback sheets we did after the end of the term.

“Our country isn’t honest itself. People give money to policemen and doctors. We can’t change it, it’s our nature… It was obvious that everything would go like this. We don’t need to protest, we should change ourselves first. ”

“I’ve taken part in elections but I’ve ignored protests absolutely, because firstly I don’t think the protest will have a success,  and secondly I really don’t want to be captured by police… as it was with some people who just passed the place of protest.”

“I have controversial feelings about these events. No doubt there was cheating during elections. But on the other hand, government has done some really beneficial improvements… I haven’t taken part in protest movement, I think it’s too dangerous.”

“In my opinion, the ruling party tries to strengthen its power and uses dishonest methods for this. People don’t approve of this fact and go to protests, I think it’s normal for every country.”

“I’ve been on two protests and I was really scared on December 26th, because there were a lot of militaries and police arrested everyone who said something loudly. The first meeting on Bolotnaya Square was very boring and I felt like a donkey on the walk. Today there is nothing we can do with that situation, because opposition hasn’t got its leader. ”

“The result of elections and the following protests was expected, so all I have to say – politics is a dirty affair.”

What do you think will be happening in Russia over the next year?  The next five years?

I’m not sure much could change, honestly. Next year in March the country chooses its president, or rather has to confirm officially Putin in the place, as everything’s been already decided and even announced during the meeting of the United Russia some two months ago. It was humiliating and funny at the same time to see the two leaders publicly agreeing on a political swap. Sometimes “IF” was mentioned, concerning the presidential elections. IF is easily substituted by WHEN, in this case, it’s no condition, really. Upon the elections we might see some protests again, subsiding rather quickly I believe. And because a couple of days ago Vladimir Putin announced in an interview that “he would not be Putin number 2 in the new term”, I guess we should expect some surprises.

In the next five years – we will host winter Olympics in 2014 and will be preparing to host FIFA World Cup in 2018. A lot of natural resources will be exported. A lot of promises will be made. Authorities will continue to “fight” corruption. I believe, though, that life will be gradually getting better, as it has been for some years (let’s do the parliament some justice!). I hope people in power will start to respect people of the country – and trust their choice.

Reading through my answers now I understand that you might get confused over a too sarcastic impression they make. I was in Paris in November (attending TESOL France Colloquium), and strolling along the streets of this European city I came across one magazine sold in every newsstand. Here’s the picture of the cover. 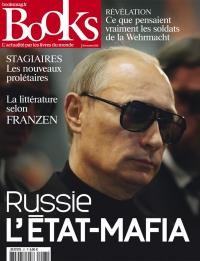 I don’t want the world to know my great country I’m very proud of and happy to live in by this image. I hope for positive changes!

Thank you very much for your questions!