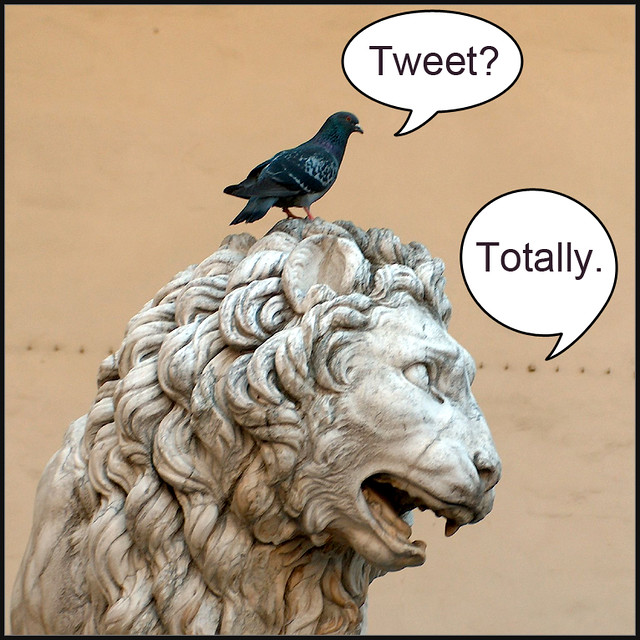 A fun writing lesson for English Language Learners is showing videos or images of animals and asking them to write down what they think they believe the animal might be thinking. I’ve written a number of posts related to these kinds of lessons and variations on it (having paintings or parts of the earth talk) and thought I’d bring them, and additional resources, all together in one “Best” list (feel free to contribute your own ideas!):

Video Challenge For Students: What Is This Lion Thinking?

“What Is This Animal Thinking or Saying (If It Could Talk)?” Is A Fun Language Development Exercise

What Would This Animal Be Saying And/Or Thinking?

What Are People In This Painting Thinking?

Nature Is Speaking is an amazing series of videos where celebrities give voice to parts of nature that are being threatened, including the ocean, coral reefs, etc. The could be good models for a more serious use of this instructional strategy.

There is a YouTube channel by Chris Cohen that he calls Animal Translations, where he puts his voice to animal thoughts. The accent is a bit thick, so it might be difficult for ELLs to hear everything, but they’d certainly get the idea. Then, students could create their own internal dialogue they could perform while the video was shown on a screen without sound.

The Comedy Wildlife Photography Awards are great. They’re perfect for this list.

Video Of Seth Rogen Giving Voice To Produce Inappropriate For Class, But Is A Great Lesson Idea For ELLs

Animal expressions is a fun collection of photo from The Boston Globe.

I’m adding this post to The Best Ways To Use Photos In Lessons.

Nathan Pyle shares pretty creative cartoons and videos online.  In one of his series, he has pigeons walking around having conversations.  Yes, I know it sounds weird, but it works.  You can see one of his videos here and, at the same time, he explains how he uses Instagram to create them.  I think students could use this technique, too, and not just with pigeons.

Can someone please make a video of what the fish is saying during this ride? I think we all need to see that. https://t.co/07zrhVknm6

Took my dogs to take their yearly christmas photos. It’s really hard when you have one super photogenic dog and one dog having an existential crisis. pic.twitter.com/4gUyIsB5OJ

when you have chatty cats pic.twitter.com/JdWLLfQT3J

A photographer was lying on his back to shoot a picture of the ceiling when he was approached by curious pigeons.🤩 pic.twitter.com/Rjpsu56XuI

Now, This Is An Interesting Lesson — “Taking A Shower May Be Bad For You”

The Best Online Resources To Learn About Charles Darwin