It’s A Miracle! Kahoot Now Can Show Questions On The Same Screen As The Answers 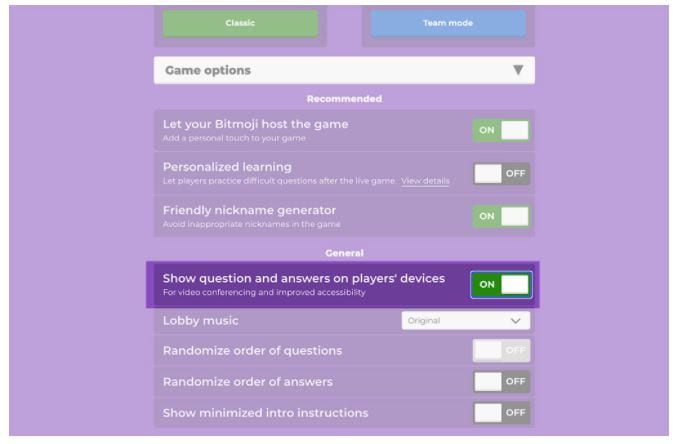 I know tons of educators have been enthusiastically endorsing Kahoot for years.

From my perspective, it’s been okay, but I’ve always thought it was weird that it didn’t show the questions on the same screen as the answers.  It moved from being weird in my mind to not making any sense at all over the past year when, in order to use it, students had to split their screens.

Though the Quizizz interface isn’t as elegant,  its ability to show the questions and answers on the same screen made it much more accessible.  On top of that, and even more importantly, it allowed its games to be able to be played in breakout rooms in teams.  That wasn’t possible with Kahoot because students still had to see the teacher’s screen.

That changed this week with Kahoot’s announcement that you have the option now to make the question and answer on the same screen.  I am probably missing something, but I don’t really understand why a teacher wouldn’t want to use that option, so I’m perplexed that they made it an option instead of the default.

But that doesn’t really matter.  They finally did it.

I am surprised, however, that I had to learn about it through Richard Byrne, the extraordinarily edtech blogger.

I know this will be a big deal for a ton of teachers, and I’m unsure why they didn’t push the news out to all its subscribers.

They put it on a blog post (which also explains how to enable the option).  But I wonder how many of its users read their blog (not me)?

I’m a paying subscriber (even with its not showing a question on the same screen as answers, its library of pre-made quizzes was still attractive) and who knows how I would have learned about it if it hadn’t been for Richard’s post.

The important thing is that they finally did it, and it will benefit my students.

“Pioneers Of Flight” Is A Nice Collection Of Smithsonian Interactives