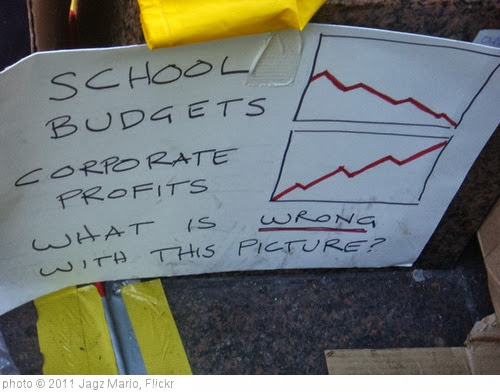 I’m publishing this post with the expectation that readers will be contributing additions. I was prompted to publish it sooner than I would have ordinarily done after reading the exceptional Gail Collins column in The New York Times, Reading, ’Riting and Revenues, which is a must-read about the dangers of privatizing public education.

So, this list is starting off short, but I expect that it will grow quickly.

Here are my choices for A Beginning “The Best…” List On The Dangers Of Privatizing Public Education:

As I mentioned earlier in this post, Gail Collins column in The New York Times, Reading, ’Riting and Revenues is a must-read about the dangers of privatizing public education.

“The Price Is Double” — Two Stories About School Reform & Money is a post I’ve written.

Diane Ravitch talks about the issue at the beginning of this interview in Mother Jones magazine.

How Online Learning Companies Bought America’s Schools is from The Nation.

An Explosion in Lobbying around For-Profit K-12 Programs is by Dana Goldstein.

Profits and Questions at Online Charter Schools is from The New York Times.

Here’s a good place to get a nice intro on how online learning can be done effectively: The California Educator, a publication of the California Teacher’s Association, published a very good introduction to the whole idea of “cyber learning,” and I think it’s very balanced. The February issue contains several related article, though I think the best ones are Surf’s up! and Virtual schools still need real teachers and structure.

Public Schools Are The Next Big Thing For Private Equity And Venture Capital is from Reuters.

The big business of charter schools is from Valerie Strauss at The Washington Post.

Joel Klein, Underdog: “The Real Losers Will Be Our Kids” is by Justin Baeder at Education Week.

Why I Am Against For-Profit Public Schools is by Chris Lehmann.

Fear of For-Profit Schools Is Well-Founded is by Walt Gardner at Education Week. I’m adding it to A Beginning “The Best…” List On The Dangers Of Privatizing Public Education.

Ed Tech, Privatization And Plunder is by David F. Carr.

Venture Capitalists Are Poised to ‘Disrupt’ Everything About the Education Market is from The Nation.

Private Interests Coming to a Public School Near You is from The Atlantic.

Feedback is welcome. I hope to expand this list quickly.

You might also want to explore the over 675 other “The Best…” lists I’ve compiled.

“Some Of These ‘Parent Academies’ Just Don’t Get It…”