Rosa Parks was arrested on this day in 1955.

Here are a few resources I’ve pulled together about her life:

There’s an excellent review of a new biography of the late Rosa Parks in The New York Times, including this great quote: 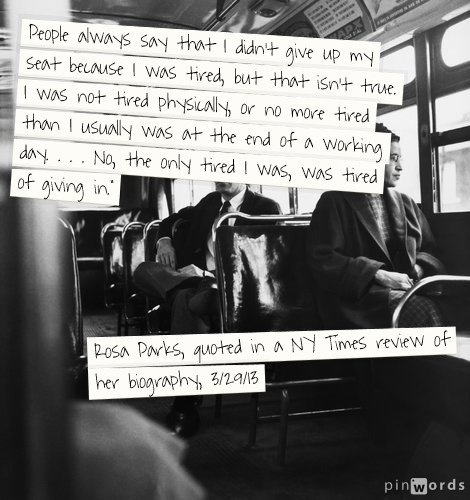 A Poorly Worded RNC Tweet On Rosa Parks Backfires is from NPR.

“@ezraklein: If racism has ended, how do you explain these 9 charts? http://t.co/iNCnXPp2Gn”

Rosa Parks: How I Fought For Civil Rights is from Scholastic.

Here’s a slideshow on Rosa Parks from CBS News.

Opinion: It’s time to free Rosa Parks from the bus is from CNN.

Here are videos that may not show up in an RSS Reader:

This Sure Is One Impressive Interactive Infographic On The Civil War

The Best Visualizations Of Story Arcs