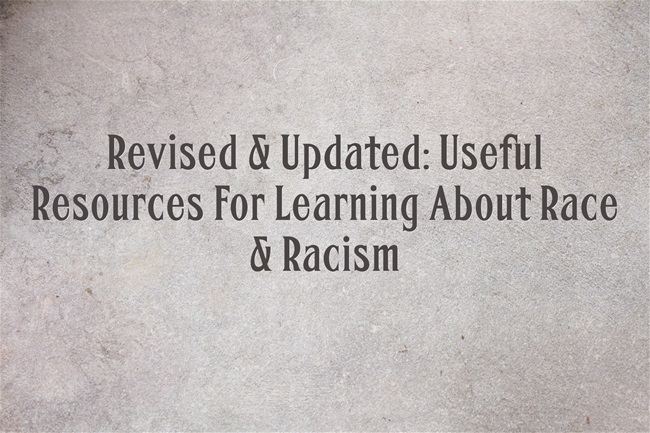 As regular readers know, I’ve been revising and updating the forty-five separate “Best” lists I have related to race and racism, and you can see them all here.

All those lists contain resources that I have used or are using in my classes.

However, there are a lot of materials that I have not yet incorporated in my teaching, but anticipate doing so sometime in the future.

As I use each one, I’ll move them over the appropriate lists and, of course, I’ll continually be adding things here, too:

When Whites Just Don’t Get It, Part 2 is by Nicholas Kristof at The New York Times.

Whites riot over pumpkins in NH and Twitter turns it into epic lesson about Ferguson is from Raw Story.

Text to Text | ‘Little Things Are Big’ and ‘Students See Many Slights as Racial ‘Microaggressions’ is from The New York Times Learning Network.

This chart explains why black people fear being killed by the police is from Vox.

Is It An ‘Uprising’ Or A ‘Riot’? Depends On Who’s Watching is from NPR.

Statistic Of The Day: Half Of Whites See No Racism

Are you guilty of these 12 microaggressions? is from Mashable.

Poor white kids are less likely to go to prison than rich black kids is from The Washington Post.

Text to Text | ‘The Absolutely True Diary of a Part-Time Indian’ and ‘On the Reservation and Off, Schools See a Changing Tide’ is from The New York Times Learning Network.

A C-SPAN caller asked a black guest how to stop being prejudiced. Here’s how she responded. is from The Washington Post.

Repeated experiences of racism most damaging to mental health is from Science Daily.

“The Underground Railroad is a numerator without a denominator.” This essay on its mythologizing is a must read https://t.co/TG5pt1cufL

What to do when you’re confronted with offensive speech https://t.co/wdbJhtQ1Wp

More reasons why everyone has a stake in ending segregation. (Via @JohnBKing) https://t.co/0r1FKxkN5E

Go beyond “be kind to everyone” and teach white kids to challenge racism https://t.co/Gns8wMAHo5 pic.twitter.com/SAwUEfvrhL

Andrew Jackson, who we honor on our currency, offered $300 bonus for whipping his runaway slaves. https://t.co/5SkuCAjP9z

Your students love TV, so why not use #cartoons to help them #deconstruct #stereotypes? @RethinkSchools #curriculum https://t.co/cZ2QO1K6Ge pic.twitter.com/j14ZetMlKW

This is really on point re: pervasive / casual menu racism @bonnietsui https://t.co/LMCN0fSDYd

Really good roundup of everything we know about the health effects of discrimination: https://t.co/wqK4Osm24n

Teaching your kids not to “see” race is a terrible idea, studies have found https://t.co/OkKAHZJjSl

Racism Is Literally Bad For Your Health is from NPR.

Racism Scale is a useful, and there’s no other way to put it, scale describing racism.

Understanding Implicit Bias Through Photography is from Teaching Tolerance.

Your big questions about race, answered is from CNN.

Resources for Teaching About Race and Racism With The New York Times is from The NY Times Learning Network.

“Interactive: how much water is used in the production of different foods?”