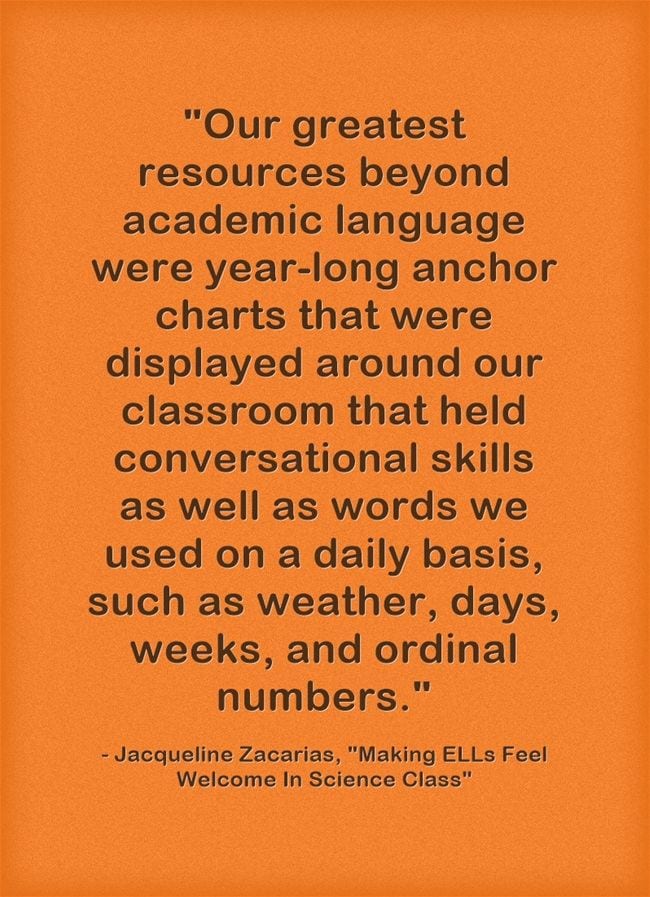 Jacqueline Zacarias is a fifth year educator in Winchester, Virginia. After spending three years in third grade, she is currently in her second year of high school teaching English to speakers of other languages in grades 9-12. Follow her on twitter.

When I accepted my position as an ELL teacher in a high school, my world began to turn upside down. At times, I wasn’t sure what I thinking, and at other times, I couldn’t wait to tackle the world of language acquisition head on. I had no idea what I’d be teaching, how I’d be teaching it, or to what degree I’d be working on my own or with other ELL educators. One month before school began, I found out I was slated for a sheltered instruction science class. I was terrified.

What I did know was that I’d bring my best practices from my elementary classroom into my science class. I would gather data on the current levels of my student’s proficiency in English, gage what they knew in regards to the expectations they would face in the following year in Earth Science, and map out my instruction the best I could.

I quickly learned that our biggest obstacle we’d face together (as I was learning this a week or two before I was teaching it!) was going to be the cognitive academic language proficiency needed to be gained in such a small amount of time before they were off on their own in a general education setting surrounded by native English speakers as well as EL peers.

Prior to the introduction of a new unit, I pre-assessed their knowledge either individually or in groups. Many words we were viewing were cognates, once in which they had an understanding what the word translated into. What they had difficulty with was putting the vocabulary into practice when it came to understanding how the word would function in science.

I introduced different graphic organizers they’d be viewing in the future and tried to utilize one for each unit in order to show the importance of being able to read them. We viewed and created visual picture diagrams with labels, dove into academic vocabulary they would read on a test, and worked with as much realia and videos we had access in order to support the learning process of my auditory, visual and kinesthetic students.

We played Kahoot and utilized Quizlet as a means for spiral reviewing previously taught content. Quizlet became one of my ‘rotations’ while working in small groups. Students would identify units in which they were struggling a bit and would self-pace their review by utilizing the different features of quizlet to self-advocate where their meaning broke down when studying the vocabulary.

By utilizing heterogeneous and homogeneous grouping, as well as some whole group time for our “morning message” (helped with writing the date in English as well as days of the week and months of the year), students of different level abilities were able to shine with their peers in different moments. While one may have a good hold on pronunciation of words, another may be able to assist with a sentence frame and spelling. Our greatest resources beyond academic language were year-long anchor charts that were displayed around our classroom that held conversational skills as well as words we used on a daily basis, such as weather, days, weeks, and ordinal numbers.

My students from my past year are currently mainstreamed in Earth Science courses and are said to be doing well! Their success is in great part to their current Earth Science teacher who makes them feel welcome, involved, and makes the greatest effort to make her curriculum accessible to every single student in her classroom. They are also part of a much larger group with classes upwards of 30 students (we had a maximum number of eleven students at any given time), but are utilizing the resources we put together last year to help them support their current learning. They learned who they are as students, individuals in and out of school in the United States, and I’m a better person every single day for knowing them. How lucky are we as educators to be a chapter in their book of life!

The Best Blogs For Sharing Resources/Links — 2009

How Cool Is This? NASA Has A Site For Their Infographics & Lets You Create Your Own!