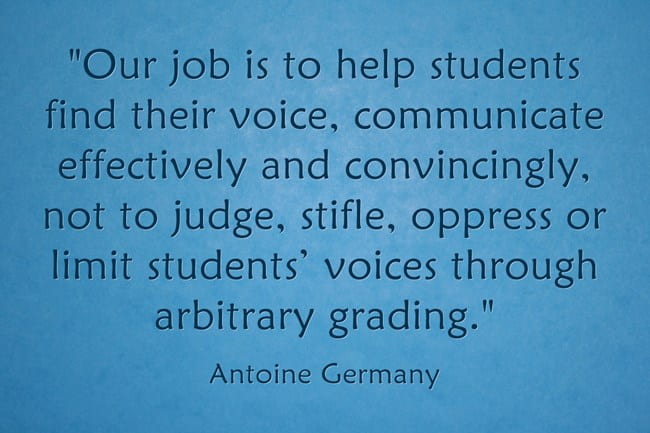 AN EARLY HOLIDAY GIFT TO FANS OF “LABOR-BASED GRADING”

My colleague Antoine Germany has contributed this new “companion” post….

Antoine Germany is a teacher at Luther Burbank High School in Sacramento, Calif., and chair of its English Department.

I can recall a skirmish with one of my earliest teachers. I remember her name and what she looked like, but neither is important for this tale. She was a well meaning, good natured, hard working educator. The kind of teacher every parent would want their eight or nine year old son or daughter to have. I recall her room was filled with multicultural faces of great inventors and writers and I remember her recounting how every voice and every child regardless of their background or race mattered. I also recall her raising her voice to scold my black friend who uttered the “n word” to me one day in class. I rushed to his defense. “He didn’t mean it in the way you’re taking it,” I stammered. She would have none of it. I was sent to the principal’s office for being defiant and defending the indefensible.

I know this teacher was well meaning. She rightfully knew that the “n word” has a long and painful history. She was, in her mind, taking a stand against racism and racial slurs. But as I reflect back on this episode and many other episodes like it during my educational journey I also realize that this teacher was engaging in a practice that many educators unwittingly participate in. She was policing words without understanding context. She was also making clear that she was the ultimate decider of what was racist, unacceptable and more importantly what I, as a student of color, should find offensive and acceptable.

This dynamic of the teacher defining what is unacceptable and tactically defining what is acceptable without student input is not unique. Antiracism has become a popular term in many educational circles. The term typically refers to a belief that in a racist society that one cannot simply be not a racist–they must be anti-racist–they must name, and disrupt racist practices in whatever context they find them. In my opinion, one of the earliest places you see race, culture and oppression rear its insidious head is in the classroom, particularly when it comes to composition.

Words matter. However, which words are taught and which words are considered “good” or “better” or “bad” are usually arbitrated by our earliest teachers. The very emphasis of writing over other forms of communication is an example of cultural values. A typical composition class focuses on “assigning” writing tasks and are typically graded based upon a students’ ability to comply with the instructors’ requirements; whether it’s the length of the work or the “right” type of thesis sentence. The idea is that the teacher teaches students the “correct” way to write an essay and the student will be graded on how well she or he complied or most closely regurgitated what the teachers taught. The student is then graded on his or her level of obedience. Many teachers use rubrics that appear objective, yet most students know that the rubric is subjectively used by the teacher.

This type of instruction is problematic for a myriad of reasons, but one of the most obvious is its oppressive effect on what composition should be about in the first place, which is communication. By grading students on their writing compliance we’re essentially creating a hierarchical structure that is based not only on what the teacher deems “good” writing but also passing judgement on what “bad” writing is. Students learn quickly that “effective” communication is typically eurocentric, linear, emotionless and succinct. Creativity, non linear, story-based arguments are frowned upon unless it’s in creative writing class. Slang or non-standard english words or phrases are eradicated with the stroke of the red pen.

Moreover the very way composition is taught is usually in a sequential, linear fashion which breaks writing down into small pieces and taught incrementally. Although writing at its core is a creative act that doesn’t lend itself to sequential instruction, many teachers try to teach it like a math equation.

Am I saying we should let students write whatever they want? Am I suggesting that wanting students to learn effective syntax is racist? No. What I am suggesting is that grading should be divorced from the actual writing product the student produces. If we must grade on something it should be on effort. Did they spend the time to revise? Did they reflect? Did they get peers to read their work and hone what they are trying to say? Did the student have a voice in what should be graded?  In this model the teacher is a coach, not a judge. A coach works with a student to achieve an underlying goal which in this case is to most effectively communicate a student’s thoughts and ideas.

Labor based or contract grading is a good starting point to examine a new way of approaching grading and how the composition process could look like in an English classroom. Is it as efficient or quick as a typical point based grading system? I would suggest that “efficiency” and the “averaging” of students’ performance is the very way of thinking we, as antiracist teachers, should be eliminating. Our job is to help students find their voice, communicate effectively and convincingly, not to judge, stifle, oppress or limit students’ voices through arbitrary grading.