Google’s Ngram Viewer is the “granddaddy” of tools for creating charts showing the frequency that words are used over time in books. You can see lots of information about that particular tool at The Best Posts To Help Understand Google’s New “Books Ngram Viewer.”

Others now have been implementing their own versions:

The NY Times has deleted their Chronicle feature (discussed below).  However,  someone else has created Wordeebee, which does something similar. 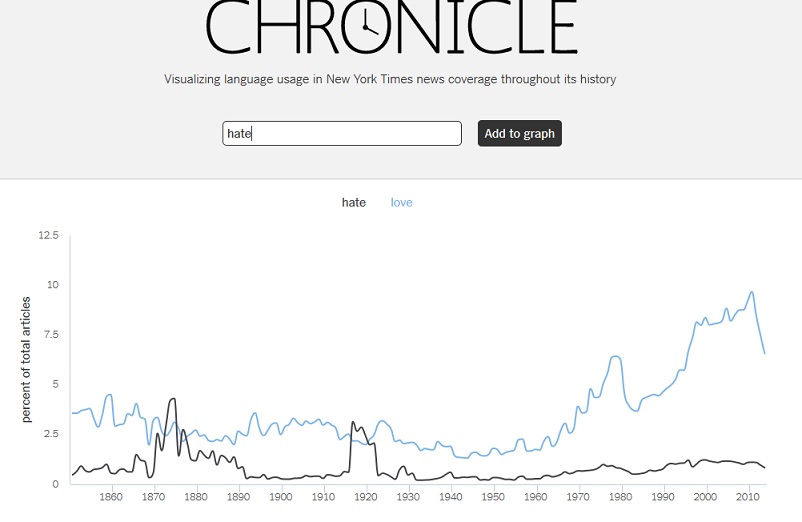 The New York Times has created the Chronicle. It’s their version of the Google Books Ngram Viewer, which charts word use over the years in the books they’ve indexed. The Times, though, indexes word usage in its own history. The image at the top of this post shows the results of my charting “love” and “hate.” It looks like love is winning! The Chronicle is very easy to use and no registration is required. It, and the Ngram Viewer, can be used with English Language Learners and other students in a number of ways, ranging from just being a fun and simple way for them to play with words to being a tool to correlate certain word usage with political attitudes (as I did in a recent column at Education Week Teacher).

The same day The New York Times announced their own version of Google’s Ngram Viewer, the online review site Yelp unveiled their own. It’s called Yelp Trends and you can compare how often different words are used in reviews at cities around the world. It’s very easy to use and no registration is required. You can see two examples above that I created – comparing soccer, basketball and jogging in Sacramento and in London. Obviously, soccer isn’t going to be mentioned much in London since they call it football there. I wonder if I shared these with students how many would figure that out? Have students create their own and then challenge their classmates to explain the reason for the differences (after they figure it out themselves) could just be one fun way to use it in class — that is, if Yelp isn’t blocked by school district content filters. You can read more about Yelp Trends at Slate.

Bookworm is another addition to this list. Despite its name, it focuses on word use in the movies, and operates in a similar fashion to the other sites I mentioned. Type in a word or phrase and it will search the dialogue in thousands of movies and TV shows and trace differences over the years.

The US News Map is a cool interactive created by The Georgia Tech Research Institute that lets you track specific word usage in historical American newspapers. It’s like a Google Ngram for old newspapers.

Slate has an excellent article on it, and how it can be used.

I’m adding this post to The Best Resources For Creating Infographics.