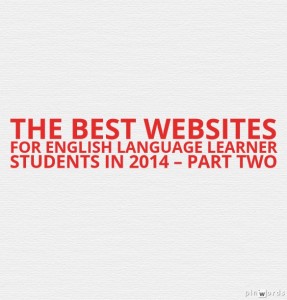 Here are my choices for The Best Websites For English Language Learner Students In 2014 – Part Two:

ClipDis a new web and smartphone app that lets you type in any sentence and then provides it to you in a short video with actors from popular movies speaking it. Even better, you don’t have to register in order to create one and be provided a unique url address for linking to it. Here’s one I made.

Incredibox, the incredibly easy music-creating site that’s been on The Best Online Sites For Creating Music list for years, has just announced its annual update. Version Four has even more sounds to mix, and will only make it more fun for students to use. I have my English Language Learners create their tracks and then describe — verbally and in writing — why they made their particular composition and what they want people to visualize when they listen to it.

Write About is a new site co-founded by educator John Spencer (his name may be familiar with readers since I’ve previously shared his work many times here). His co-founder is Brad Wilson. Write About provides many (and I mean many) images with writing prompts. Students can write their response and do an audio recording of it. Teachers can create virtual classrooms and provide individual written feedback to student writing. Student creations can be shared publicly or just with their classmates. Teachers can change prompts or upload their own photos. There’s a lot more, too. Plus, you can’t beat the cost (or non-cost):

Teachers can sign up and participate in the Write About community for free. Up to 40 free student accounts can be created with up to 3 posts each. Unlimited posts can be added with a Classroom account for $4.95/month. Teachers with multiple classes can add up to 250 students with unlimited posts for $7.95/month.

The Emoji Finder invites you to “Search for emoticons, then copy & paste.” I tried a number of words, and it came up with a variety of emoji icons for all of them. I wouldn’t make it a central tool for my teaching, but I could see inviting my Beginning English Language Learners to have fun with it sometime if we had a few minutes left in the computer lab.

The “You Say Potato” accent language map has people all over the world saying the word…”potato.” You can easily add your own voice to it.

Leap.it is a new search engine that portrays search results in a visually attractive way.  One feature that could come in handy for students doing research is that you’re supposed to be able to create something called a “perspective” which appears to just be your own personal collection of sites that could be shared with other. I like that idea, but couldn’t figure out how to make it work.

Thanks to a tweet from Barbara Sakamoto, I learned about site called Unite For Literacy. It has over one-hundred simple books in English that the reader can choose to have narrated in English or their choice of many other languages.

Breaking News is a current events news-reader designed in an intriguing way. You can type in whatever topic you want to read about — soccer, major news, refugees — and you’re provided with a list of headlines to stories about it. Clicking on the headlines will take you to the story. But the real interesting part of the site is that if you click on a globe icon on the upper right of the page, you’ll go to a world map showing you the location of the where the stories are originating. Clicking on the dots will also take you to the story. I’m adding it to The Best Visually Engaging News Sites, which I just completely updated and revised.

The Best Theory Of Knowledge Resources In 2018 – Part Two

Quote Of The Day: “Active Learning” In Science (& Other!) Classrooms