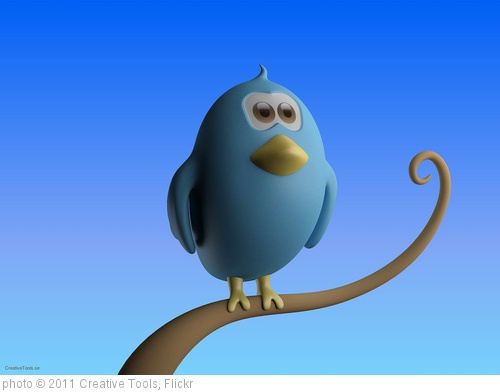 As regular readers know, I recently joined Twitter and have had a good experience with it, though I’m skeptical that it will attract a following among teachers beyond those particularly interested in educational technology (see My Verdict On Twitter).

The title of each resource is pretty self-explanatory, so I’m just going to list them.

Here are my choices for The Best Resources For Beginning To Learn What Twitter Is All About (Except for the first one, they’re not listed in any particular order of preference):

Start off with What Is Twitter? by Sue Waters

Twitter Handbook For Teachers (thanks to Richard Byrne for the tip)

What Is This Twitter Thing, And Why Should I Care?

Nick Peachey writes about Building Your Twitter Network, with a focus on ELT/ESL teachers.

100 Tips To Be A Smarter, Better Twitterer (thanks to Diana Dell for the tip)

All You Need To Know To Twitter from the NY Times.

TIME Magazine has published an article titled How Twitter Will Change the Way We Live.  That might be a bit of an exaggeration, but it is an interesting article.

Everything I Need to Know About Twitter I Learned in J School is a useful post from Mashable.

Shelly Terrell has created three great lists of educators to follow on Twitter. One is of people who help others with questions, another ESL/EFL teachers, and the third focuses on people who tweet about edtech resources.

Not only did she make these lists, but she created them using nifty web tools that let you easily & quickly “follow” them!

Getting the Most Out of Twitter is the title of a new article in the New York Times . It’s short and helpful to all Twitter users–both new and old.

“The Path To 10 Billion Tweets” is a nice-looking infographic giving you a ton of information about Twitter.

Twitter Starts Teaching You How To Tweet With Videos is the title of a TechCrunch post that several new short videos Twitter itself has made to help people understand how to use the service.

Seven top tips for building your professional learning network with Twitter is a short post by Helen Whitehead. It offers some great suggestions.

Sue Waters has done it again by writing a great instructional post. This time, it’s A Twitteraholic’s Guide to tweets, hashtags, and all things Twitter.

Listorious seems like a great way to find people to follow on Twitter. Type in, or click on, your topic of interest and you can then see who has made lists of people for that topic.

“Mom, This Is How Twitter Works — Not Just For Moms” is a great visual and text explanation of how Twitter works.

If these resources aren’t enough for you, then you can visit “25 Important Twitter Guides and Apps For Teachers.” It’s a nice list by the EDUemic blog.

In another example of my many ed tech blindspots, I didn’t even know that Twitter had an Advanced Search Option until I read a post by Richard Byrne. You can go to his post to see a video about how to use it, as well as see other links he has about maximizing Twitter use.

There are two regularly scheduled Twitter “chats” for ESL/EFL teachers, and they’re both great professional development opportunities to connect with colleagues from afar.

One is #ELLCHAT, which has a Facebook page. Those take place on Mondays.

The other is #ELTCHAT, which takes place on Wednesdays. It has a webpage.

Here are two resources offering simple details on how best to participate in these kinds of Twitter Chats:

An Educators Guide To Twitter, compiled by Steven Anderson.

Twitter’s Secret Handshake is a very interesting article in The New York Times about hashtags.

What Do Teachers Do On Twitter? is a nice slideshow presentation.

Use Twitter? Always Remember These Three Things is an article from The New York Times.

Cybrary Man has a great page of information about how to participate in a chat on Twitter.

Twijector displays tweets using a particular hashtag on an attractive screen that can be displayed at conferences. It can also be used by people who just want to view tweets using a hashtag, like in one of the many educational chats.

Teachers Teaching Teachers, on Twitter: Q. and A. on ‘Edchats’ is from The New York Times Learning Network.

“What’s Up” is a fascinating tool that lets you easily explore the most popular subjects on Twitter for any day or for any hour of that day. The Information Aesthetics blog has more information about the site.

If you want to know how to participate in a Chat on Twitter, Read Write Web just posted How to Get Started With Twitter Chats.

10 Tips on Using Twitter Wisely is from Read Write Web.

Twitter Just Made It Really Easy To Find Out If Another User Is Following You is a post some useful information for those of us on Twitter (it just makes it easier to determine if you can someone a Direct Message or not).

I recently discovered that Tweetdeck now has a Web version. It seems very comparable to the deskstop app. However, there is one important difference. When you retweet in the desktop app, you retweet in the “old” way — it shows your name as part of the tweet. The Web version retweets are in the “new” Twitter style.

A Beginner’s Guide to Twitter is from Read Write Web.

Nine Things You Didn’t Know About Twitter is from The New York Times.

How to Get More Clicks on Twitter is a useful infographic.

Be Better at Twitter: The Definitive, Data-Driven Guide is from The Atlantic.

Leveraging Your PLN With Hashtags comes from the Powerful Learning Practice blog.

This is a minor issue, but Twitter has announced that all users have the ability to upload a “header and background photos” on their profile page.

They have a short and sweet video showing how to do it:

With TweetChat Offline, What Websites are Best for Twitter Edchats? is from Wesley Fryer.

Finally, You Can Search All Your Tweets (& Everybody Else’s, Too)

This is Why No One Follows You On Twitter is from Mashable.

Twitter Illiterate? Mastering the @BC’s is from The New York Times.

The first one, which I think could be very useful, is called Nuzzel. Once you log-into the site using your Twitter (or Facebook) account, you’re shown a list of the articles that the people you follow on Twitter are sharing the most. The link is shown first, and then the tweets from the people you follow about it. I think it could really save a lot of time. You can read more about it in The New York Times.

The other site, which is intriguing but I’m not sure how much added-benefit it could bring, is called Nurph. You can read more about it at TechCrunch, but it appears to turn a hashtag conversation into a sort of chatroom (and also lets you replay the tweets in video form). It might, or might not, be an alternative tool for use in Twitter Chats.

Getting Started on Twitter (for English Language Teachers) is from “AnthonyTeacher.”

Hashtags, Twitter Chats and TweetDeck for Education is from The Edublogger.

Twitter education chats: An astonishing source of professional development is from Scholastic.

Please include attribution to HubSpot with this graphic.

3 Tools to Easily Participate in Twitter Chats is from Instructional Tech Talk.

Twitter unveiled a new option of creating polls on the service. Here’s a good guide on how to use this new feature.

The 5 Best Tools for Twitter Chats is from Razor Social.

How to Use Twitter is a great guide from one of The NY Times social media staff.

Twitter has now made it easier to create “Tweetstorms” or “threaded Tweets.”  These are basically multi-part tweets communicating a wider message.  If you use the Twitter app or website, you just click on the “+” sign.  It’s still not available on Tweetdeck, however.  You can read more about it at The Verge.

This bot unrolls Twitter threads and turns them into readable blog posts is a TechCrunch post that makes Twitter “threads” (multiple consecutive tweets about the same subject) more easily readable.

Late last year, Twitter began testing a “bookmark” feature where you could save tweets you wanted to read later (instead of having to “like” them with the heart icon).  It became available on my Twitter Mobile app last night and seems useful.  I’m not sure, though, how widely available it has become.

The Ultimate Guide to Twitter is from The Edublogger.

A few other educators and I share some ideas in an article in ASCD Educational Leadership with the over-hyped headline, Secrets of the Edu-Twitter Influencers.

Tall Tweets: Turn your Google Slides into a GIF presentation and Tweet! looks like an interesting tool.

How to unroll a Twitter thread is from The Verge.