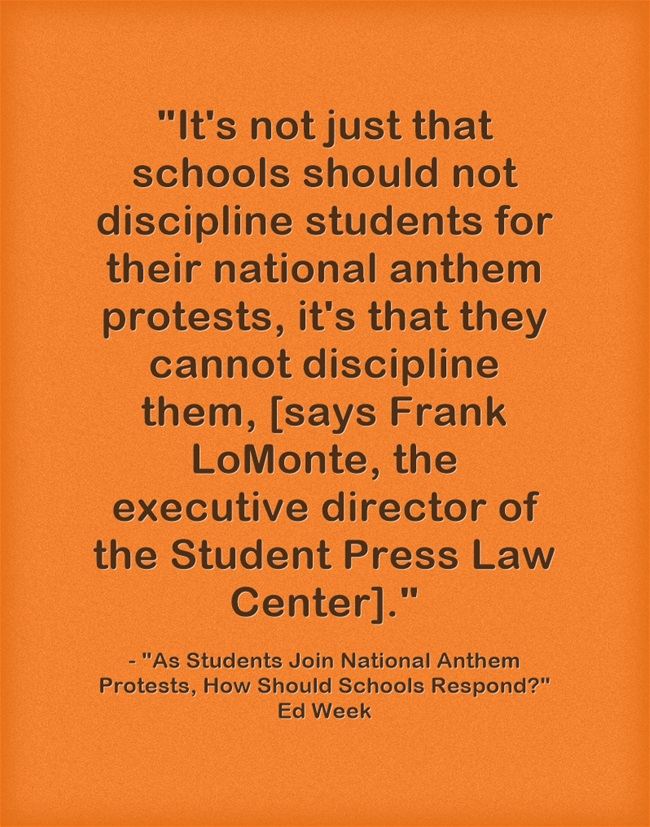 This past week, President Trump increased public attention on Colin Kaepernick’s kneeling protest during the playing of the National Anthem by attacking him and others (see video below that includes language inappropriate for some classrooms).

I’ve previously shared resources about Kaepernick’s protest in various “Best” lists, and thought I’d bring some of them together here.

I’ve got to start with Kristin Ziemke‘s great Padlet collection, which I’m embedding below:

Text to Text | Colin Kaepernick’s National Anthem Protest and Frederick Douglass’s ‘What to the Slave is the 4th of July?’ is from The New York Times Learning Network.

As Students Join National Anthem Protests, How Should Schools Respond? is from Ed Week. The top of this post has a quote from it.

The Washington Post has a good chart showing the popularity/unpopularity of Civil Rights protests over the years.

Is the National Anthem Racist? Beyond the Debate Over Colin Kaepernick is from The New York Times.

Colin Kaepernick explains why he sat during national anthem is from the NFL.

Tamara Holder: Standing for our national anthem doesn’t make you a good American is from Fox News.

Long before Kaepernick sat, L.A. teacher stood up to authority in anthem protest is from The L.A. Times.

As Students Join National Anthem Protests, How Should Schools Respond? is from Ed Week.

Racism. Police brutality. This is what the NFL protests were about from the start. Not about disrespecting the flag or anthem. #TakeAKnee pic.twitter.com/P1KfJJw24S

The Day the Real Patriots Took a Knee is a NY Times editorial.

Amid Trump’s NFL war, photos of Martin Luther King Jr. ‘taking a knee’ resurface is from The Washington Post.

They didn’t #TakeTheKnee: The Black Power protest salute that shook the world in 1968 is from The Washington Post.

Colin Kaepernick and the powerful, religious act of kneeling is from The Washington Post.

A forum for students: What is Your Reaction to Pres Trump’s Tweets About Professional Sports Leagues & Athletes? https://t.co/haSJNK3fCy pic.twitter.com/3m6PI0lB71

Your students are most likely discussing #TakeAKnee. Here’s how you can guide that discussion. https://t.co/NXGb16UfGQ pic.twitter.com/UzHxPicfg5

It’s not enough to “stand” with Kaepernick, and linking arms is a compromise that dilutes the meaning of his protest https://t.co/V8S4INWYDj

During another period, we knelt. There is nothing wrong with kneeling down to stand up against injustice. It’s protected by the Constitution pic.twitter.com/HgxqkOsqPU

Eric Reid statement on kneeling. He was the first person to kneel with Kaepernick. It’s thoughtful & worth a readhttps://t.co/jeHgPhegum

Colin Kaepernick and the Legacy of the Negro National Anthem is from The NY Times.

Video – “Colin Kaepernick: ‘Love Is at the Root of Our Resistance’”

NFL Blows A Call, But It Does Provide An Important Opportunity For Classroom Discussion

African-Americans and the Strains of the National Anthem appeared in The NY Times.

Football Players Are Protesting Police Violence, Not the Anthem https://t.co/3Mw04k9l9Z

What Do You Think of Colin Kaepernick Now? is from Sports Illustrated.

UNDERSTANDING #TAKEAKNEE is from Facing History.

Ta-Nehisi Coates: The Cancellation of Colin Kaepernick is from The NY Times.