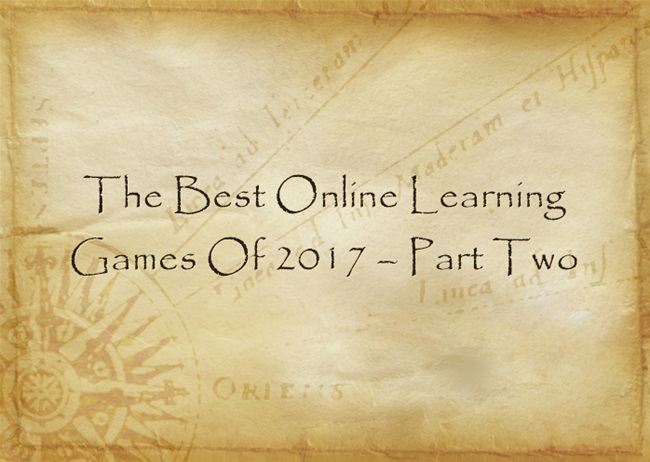 * be seen by me during the last six months of 2017. So they might have been around prior to this time, but I’m still counting them in this year’s list.

Here are my choices for The Best Online Learning Games Of 2017- Part Two:

Bamboozle lets you create games your class can play by projecting them on a screen.  They seem easy to create, though I it doesn’t yet have that large of a collection of ones that other teachers have created.  You might also be interested in The Best Websites For Creating Online Learning Games.

Payback is a new free “choose your own adventure” quasi-game that’s designed to help students anticipate college costs. I heard about it through a recent New York Times article headlined A Game to Help Students Pay the Right Price for College. It’s definitely accessible, even though it’s a bit simplistic. I could see using it to initiate a conversation with students about college issues.I’m adding this info to: The Best Resources For Showing Students Why They Should Continue Their Academic Career.

Here are several new Geography games I’m adding to The Best Online Geography Games (thanks to Google Maps Mania for the tips).

They stand out from the ones presently on the list, which are all good – but very, very similar:

Factitious is an engaging online game to teach about fake news. It could be a fun activity to do to finish-up a more extensive lesson on the topic. You can learn more about it at NPR’s article, To Test Your Fake News Judgment, Play This Game. You can also find lots of resources on teaching about fake news at The Best Tools & Lessons For Teaching Information Literacy, including the lesson plan I did for The NY Times.

Carol Salva writes about the many ways teachers can use the Kahoot game with ELLs.

Quiz Game Master lets you easily many different types of learning games for students to play. You can see a list of all the different types on the image at the top of this post. Unfortunately, the site doesn’t automatically host the games – you either have to pay $5 annually for that feature or download the games you create as a zip file.

With both Jo Boaler and Dan Meyer endorsing Super Math World, I can only assume it’s a great math learning game.

I’m not a big fan of Word Searches, but they can sometimes be a fun activity for students to create. Word Search Labs is an easy tool for creating word searches online. I’m adding it to The Best Sites For Making Crossword Puzzles & Hangman Games.

The Best Teaching Resources For The Movie, “Coco”

The Best Sites For Learning About Yom Kippur