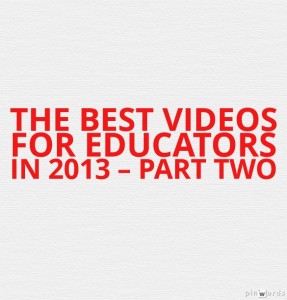 Here’s the latest in annual The Best…” posts….

This post includes my choices for videos since I posted The Best Videos For Educators In 2013 – So Far six months ago.

Here are my choices for The Best Videos For Educators In 2013 – Part Two:

Perseverance (grit) is one of the key qualities researchers have found to be essential in a successful language learner, as well as other learners.

Here’s a video demonstrating that quality that I’m adding to The Best Videos Illustrating Qualities Of A Successful Language Learner:

As I constantly tell my students, the ability to identify patterns is a key to higher-order thinking and to language-learning.

This would be a great video to play — at first, without sound — and have students try to identify the pattern in the images they see…

This is from Yahoo News and is a great illustration of “thinking outside the box”:

Here’s another “thinking outside the box video:

I’ve written in my New York Times column about how I use optical illusions with English Language Learners, and I certainly use them when teaching perception in my Theory of Knowledge class. You can many that I’ve previously posted here.

Here’s a new neat one created by Honda and puts many different illusions into one short video:

I’ve written extensively in my books and in this blog about the lessons I use with students to help them want to develop more self-control.

And I’ve also shared new videos from Sesame Street highlighting their emphasis on teaching self-control, grit, and respect this season.

My high school students love the Sesame Street videos, which I use as a short “refresher” during the year after we do our initial lesson on self-control.

This one on “The Waiting Game,” though, is the best one yet. In it, Cookie Monster demonstrates each of the strategies that Dr. Walter Mischel recommends that people use (and that he saw children apply in the marshmallow test) to enhance their self-control.

I’ll be showing the video to students and having them identify each of those strategies:

I’m adding this great video from The Center For Teaching Quality to The Best Resources On Being A Teacherpreneur:

I Wonder How Many Of Our Students Hear This When We Go Over Classroom Rules?:

I’ve previously shared a thirteen minute version of Bloom’s Taxonomy According to Andy Griffith, which you can find at The Best Resources For Helping Teachers Use Bloom’s Taxonomy In The Classroom.

The video’s creator has now edited its length down considerably. Here’s the new version:

I brought together a collection of them at A Sampling Of The Best Tweets With The #SaidNoTeacherEver Hashtag.

Now, some teachers have done a short video person — unfortunately, without giving credit to John and the original source. But it is pretty funny. And if you go to watch it on YouTube, people have made some pretty nice additions in the comments.

This next video is the best one I’ve Seen On Perseverance & Resilience.

This video is part of a new TED-Ed Lesson titled There’s no dishonor in having a disability. You can see the entire lesson here.

All I can say is…Wow.

I’m adding it to The Best Resources For Learning About The Importance Of “Grit.”

Tom Whitford was kind enough to share this fun video on Twitter. It’s the first in a series (you can see the rest by going directly to YouTube).

Everybody will enjoy it, but especially ESL teachers:

I’m adding this next video to The Best Resources On Helping Our Students Develop A “Growth Mindset”:

I’m adding this video to A Collection Of “The Best…” Lists On Infographics:

You can read more about NASA’s latest video on climate change showing what happens to the United States.

I’m adding it to The Best Resources On Differentiating Instruction.

“I shall either find a way or make one” has been attributed to Hannibal, though he probably didn’t say it.

This goat seems to exemplify that expression — no matter who said it.

I’m adding it to The Best Video Clips On Goal-Setting.

Edublogs has created this video on “What Is A Blog?”

I’m adding it to The Best Sources Of Advice For Teachers (And Others!) On How To Be Better Bloggers and to My Best Posts For Tech Novices (Plus A Few From Other People).

Video: “The fight for civil rights and freedom – With John Lewis and Bryan Stevenson”

“StepUp.io” Lets You Edit & Splice Together An Existing Video