The Best Social Studies Websites Of 2022 – Part One 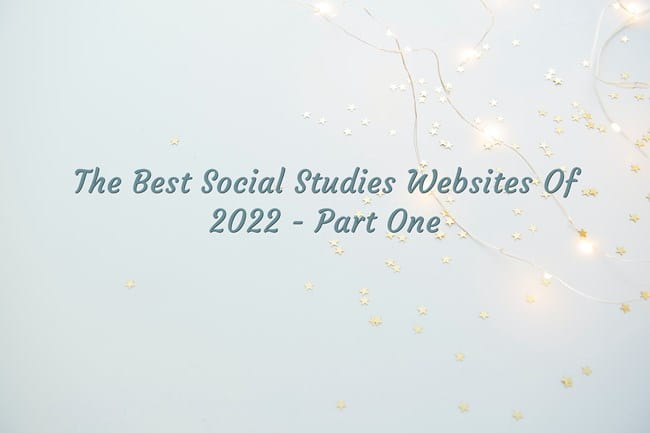 You can see all previous Social Studies lists here.

Here picks for this year – so far:

THE BEST TEACHING & LEARNING RESOURCES ABOUT THE RUSSIA/UKRAINE WAR

The Smithsonian’s National Museum of the American Latino announced that they are going to opened their first in-person exhibition in June, and they also have made it available online. You can see ¡Presente! A Latino History of the United States and read more about it and the museum at the NBC News article, Smithsonian, with first exhibition, previews planned National Latino museum. The new museum site also has lots of teaching and learning resources, and includes bilingual materials. I’m adding this info to The Best Resources For Hispanic Heritage Month.

Historic Borders is a neat interactive that allows you to see borders of countries and empires throughout history. I’m adding it to The Best Websites For Teaching & Learning About World History.

Learning With the ‘Black History, Continued’ Series is from The NY Times Learning Network.  I’m adding it to to The Best Sites To Teach About African-American History.

What Happens to Middle School Kids When You Teach Them About Slavery? Here’s a Vivid Example. is from Slate. I’m adding it to USEFUL RESOURCES FOR LEARNING ABOUT THE 400TH ANNIVERSARY OF BRINGING ENSLAVED AFRICANS TO AMERICA.

In World Atlas 2.0, you can click on any one of nearly 3,000 different data sets related to technology, population, education, etc, and a visual representation of it will show up on a world map. It’s very well done. I’m adding it to The Best Tools For Comparing Demographics Of Different Countries.

Memory of The World is a new resource on Google Arts & Culture. UNESCO organized it, and it features key documents from world history that they have brought together ” to tell their stories and highlight key moments in history that have left the world changed forever.” It includes lesson plans on how to use them in the classroom. I’m adding it to The Best “Lists Of Lists” Of Influential People, Events & Ideas and The Best Resources For Using “Object Lessons” In History.

I was recently listening to NPR and heard a program called Intelligence Squared. The organization chooses questions around current events, recruits two people to debate for each side, and then posts the video/podcast and transcript on its website. It appears to lean heavily to “establishment” voices, and its board of trustees raises questions (someone who works at a conservative think tank, a Sackler family member), but some of the debates seem like they could have value to students and teachers. I’m adding this info to The Best Sites For Students To Create & Participate In Online Debates.

The Life-Altering Differences Between White and Black Debt is from The NY Times. I’m adding it to THE BEST RESOURCES DEMONSTRATING THE WEALTH GAP BETWEEN AFRICAN-AMERICANS & WHITES.

Amazing Photos Of The Freedom Riders